Flash mobs can be cool or very lame, but when it’s a mob of people literally flashing and has been funded by an arts charity, it gets a tick for originality. 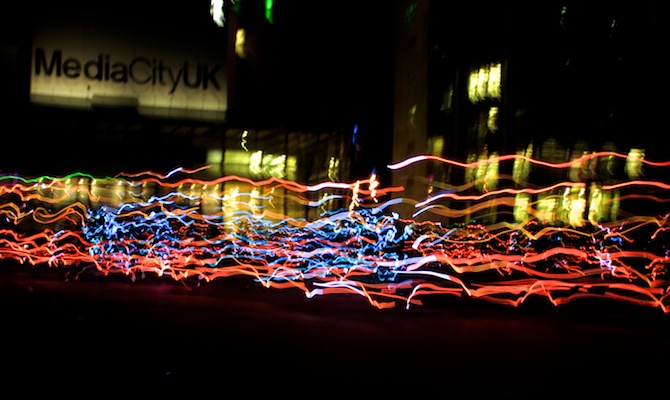 The other day I had just got home from entertaining 30 six year olds whilst dressed as a pirate (it’s a living) when my friend called me up asking me to come and watch some art thing. I was tired, hungry and in no mood for ‘art’ so informed her I’d have a quick nap and then cycle round, with no real intention of doing so. However, that really awful book Yes Man was in my bathroom, and even though the way Danny Wallace wrote it implies he is either and idiot or a liar, just looking at it made me think cycling 5 miles in the snow to stand outside and watch some live art could be fun.

I spent ten minutes looking for my house keys, which turned out to be in my pocket, filled a flask with earl grey and lemon (rock n roll baby) and put on some layers to fight the -5 weather Manchester has had for the last few days. Five minutes into my cycle the only thing I could think was ‘go to hell Danny Wallace, your book is terribly written and I want to throw aubergines at you till you cry’, fast forward half an hour later and Danny Wallace is forgotten and live art is in our midst.

For those not in the know, the BBC decided they were going to save some money and fob off London to come slum it up north with the Manchester folk. The Salford Quays was a very nice bit of Manchester where there’s an outlet mall and a theatre, not too much else, and since Salford has some rough patches it seemed a bit mad to have such a nice little oasis in the middle. Now however, it is populated with media types who like eating Marks & Spencer sandwiches whilst staring wistfully at the water dreaming of their screen plays being made into daytime TV specials instead of doing grunt work for overpaid television executives, which means Salford is moving on up.

The Salford Quays is the host for the event, the world’s first literal flash mob. It’s called Speed of Light, which really has become a slightly overused title but considering the topic we can let it slide. The NVA is a public arts charity (they spend lots of money on nice things for the general public to look at and then argue whether that counts as ‘art’ or not) who commissioned this Speed of Light which entails 400 runners who have all been trained to wear full body suits covered in remotely operated lights to run around doing weird things, whilst all the lights flash pretty colours and odd music plays in the background. It’s been in Tokyo and Edinburgh, so for of all places to get it Salford should feel very privileged if not a tad confused.

The question one must ask is, is it art?

Well, really, it seemed as if the characters from Tron had all got mashed and gone on some big invisible obstacle course, it was pretty cool, and then suddenly you remember long exposure photography and the whole thing makes perfect sense, THIS is what long exposure photography was invented for. Not for drawing penis’ in the air with your phone, but for filming live outdoor art! 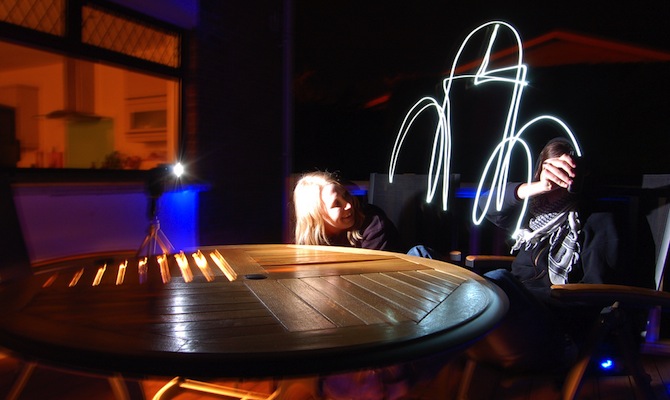 I spoke to one of the runners and asked about the event:

“Well the ad said you just need to be able to run 5k with ease, which I can, but then they make us run 8k, which I definitely did not agree to. They did give me a t-shirt and some biscuits though, so I guess it’s all right.”

So if Tracy Emin can write the name of all the men she slept with inside a tent and it be worth £300,000 (it was destroyed in a fire, and she was offered £1,000,000 to remake it) because it is deemed as art, then something that gets people outdoors, eating biscuits and feeling a bit trippy can get a tick in the art box from me.