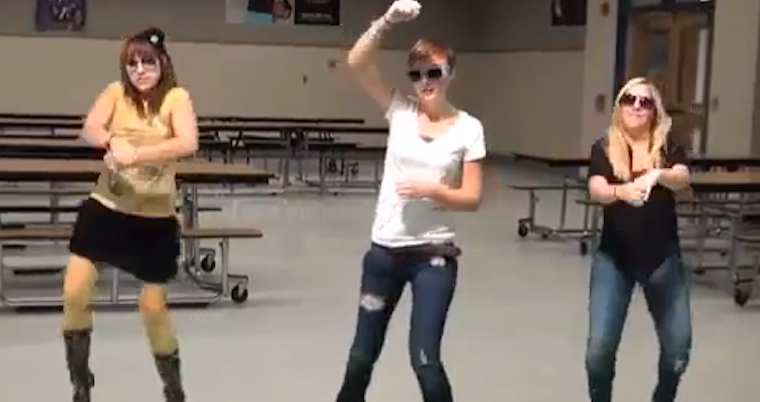 Gangnam Style has been annoying everyone for a few months now, but this parody video is so terrible that it might actually cause everyone to stop banging on about it. Fingers crossed. This is Spartan High School Style!

So yeah, Gangnam Style. It seems you haven’t really been able to go anywhere in the last few months without hearing someone shout Gangnam Style or that idiot PSY doing his stupid dance or the horrible buzzes that signal the start of the track, but it looks like it might finally be coming to an end. Admittedly Gangnam Style IS a phenomenon – it’s the most viewed video on Youtube ever FFS (although Justin Bieber’s ‘Baby’ was the most viewed before that so I don’t really know if this is really anything to brag about or is anything other than an indication of the stupidity of the world)  but whenever one of these new stupid crazes comes out everyone always has a laugh about it for a bit and then it just kinda fades away, usually because some idiot tried to rip it off or innovate it or take the piss out of it but did it REALLY cringe worthily or badly that it just made everyone hate the original craze and why they even liked it in the first place. And finally (it seems like fvcking forever since I first saw that idiot walking through the warehouse) it might have happened with Gangnam Style.

The video is made by a high school in America somewhere and man, does it suck. It’s like they haven’t even TRIED to do anything remotely good in it. It’s like, if you’re gonna do something at least make it half decent, right? I can’t believe that anyone who made this would be happy about it and want anyone in the world to ever see it, let alone advertise their school (I assume it’s an advertisement for the school and not just like some fan video or whatever. So yeah it’s called Spartan High School Style (see what they did there? Yeah already, it’s too many fvcking syllables to fit in with the song douchebag) and the video is just a bunch of teachers/students walking around the school being idiots and dancing. Only really badly. And using the worst person at photoshop ever to do all the photoediting. Like seriously, you won’t believe how bad this person is at photoshop. I think a one year old baby with no arms and half a brain could probably do a better job than whoever produced this video. Even twenty years ago the special effects would look dated.

Oh yeah and I haven’t even commented on the singing yet. It’s not like PSY is fvcking Pavarotti or anything but these guys make hims sound almost as good as him in comparison. Man, they suck. You would have thought because they made a movie they might have at least heard of autotune, but no, no no no. I mean for the most part it’s not even singing it’s just like this girl talking in a monosyllabic voice and almost rapping but not quite and it’s just like ‘eurgh why have you created this it is fvcking awful! WHY WHY WHY?’ It’s even worse when she starts singing because the vocal melody doesn’t fit in with the backing track AT ALL and sounds like something the same little baby with no arms and half a brain might have sang if it was also deaf and dumb.

Everything about this video is completely painful. If you make it through all of it then you’re a better man than me. Even though it’s completely horrible there’s a really funny bit around 1:20 that you might want to stick around for because it kinda makes it. There’s also a really good bit towards the end where the principal and his sidekicks start dancing too, but it will be super impressive if anyone makes it that far. It’s seriously that horrendous. Although it might be worth sticking around for because at the end there’s this dumb bit which implies it was a dream sequence but then one of the teachers is dancing too so OMG was it actually real!?! I’m not sure what it’s trying to imply with that scene but, like the rest of it it’s also done really badly. Etc is also misspelled in the credits which is pretty phenomenal.

If the video does signal the end of the Gangnam Style craze though I’ll probably be pretty stoked on it. If this video can’t kill it though, I don’t think anything will be able to. Try and enjoy it below:

â˜› More: First There Was Gangnam Style, Now There Is Carrier Style