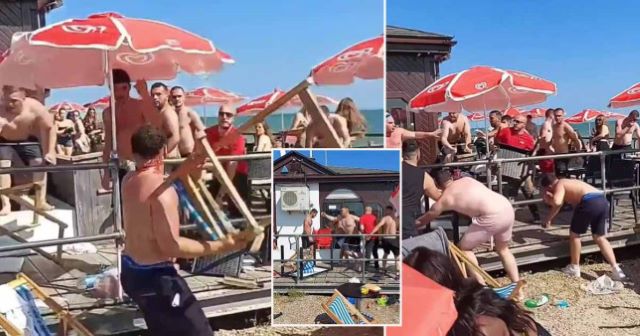 If there’s one thing we know about Brits in the summer, it’s that if you give them heat and alcohol they will eventually start beating the shit out of each other, as was the case in Southend, Essex, this past weekend.

As temperatures hit 28C, two groups of chavs started mouthing off at each other and eventually got into a full-on ECW style brawl involving deckchair, and more deckchairs…

Alcohol + Sun = brawl.
This was around families with young children. Grim behaviour 😫 pic.twitter.com/B71q9DApjb

Welp, at least it was socially distanced fighting – keeping 2 metres apart. Gotta feel for whoever’s shop that is being ripped apart by these boozed up, sunburnt morons after being allowed to open up after all this time. What a bunch of twats.

We are aware of a video circulating online showing a group of people fighting in Marine Parade, Southend, yesterday afternoon.

The people shown in the video behaved recklessly, with no care for the injuries they could have caused to friends and families around them.

We’re progressing enquiries and working to identify those pictured and will continue our high visibility patrols of the area.

For anyone who thinks they can come to Essex, to our towns and beaches, and commit crime, violence or anti-social behaviour, you can’t and if you do, you can expect a visit from us as we simply will not tolerate it.

You have been warned!

To watch a drunk Irish dude try to fight a Chinese restaurant worker over in Dublin and get KO’d into oblivion, click HERE.