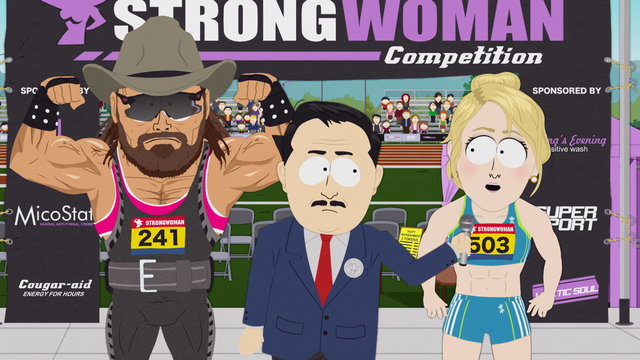 The creators of South Park have always been equal opportunity piss-takers who make fun of anything and everything to do with popular culture, but it appears their latest joke mocking trans female athletes hasn’t gone down well with some people.

The latest episode features a character named Strong Woman who says she’s ‘honoured’ to be going up against the first trans woman to ever enter the Strongwoman contest.

Hilariously, that trans woman turns out to be a South Park version of Macho Man Randy Savage called Heather Swanson, who explains that she transitioned into a woman 2 weeks ago:

Funnier still, it then turns out Heather Swanson is Strong Woman’s ex-boyfriend who transitioned into a woman and entered the contest to get revenge on her.

Aside from just having a laugh, the storyline highlights the absurdity of trans women entering female competitions and obliterating their biologically female counterparts, having had no success when competing as men.

South Park bashed Trump and Giuliani last week, then mocked trans athletes this week. This is exactly why they’ve lasted 23 seasons. Nobody is safe.

That new South Park episode was…

Look, I liked all the references to board games, but it was insanely transphobic. Quit whining about trans athletes, you crybabies.

Im trans myself and i see nothing wrong with this. Comedy has no boundries and south park is inherently a really edgy show

An accurate portrayal of future Olympics.

South Park is the bully, no matter how much the writers and fans deny it.

So suddenly being trans means South Park cant make fun of you? Guess what, you’re about 14 and a half years too late for that.

Like a couple of those Tweets also point out South Park makes fun of everyone so I don’t see why any one group should be afforded more protection than another. Besides it’s a transgender Macho Man Randy Savage cutting one of his legendary coked up promos – in what world is that not hilarious?

The show has been on fine form in 2019 – having already been banned in China after after they took the piss out of the Chinese government in a recent episode. Seems there’s no fucks given from Trey Stone & Matt Parker.