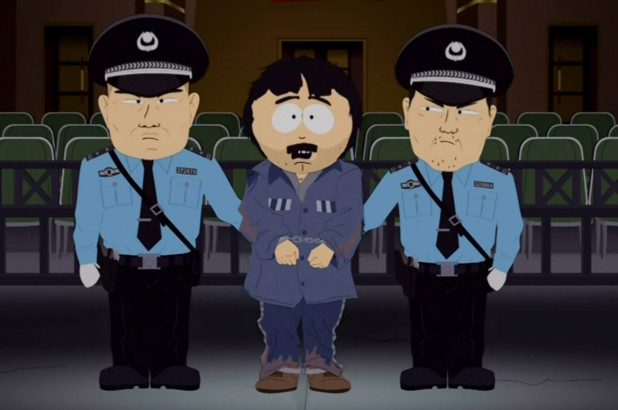 The most recent episode of South Park, ‘Band in China’, has been getting loads of media attention for its critique of the way Hollywood tends to shape its content to avoid offending Chinese government censors in any way whatsoever.

As anyone who’s ever seen South Park knows, creators Trey Parker & Matt Stone aren’t afraid of offending anybody, and this has now resulted in virtually every clip, episode and online discussion of South Park being wiped from the internet in China.

You gotta lower your ideals of freedom if you wanna suck on the warm teat of China. #southpark23

As per the NY Post, even if you search for South Park on Weibo, China’s version of Twitter, there’s not a single mention of the show among the billions of past posts.

In the episode, a rock band made up of Stan, Jimmy, Kenny and Butters is on the verge of having a movie made about them, but Chinese censors keep wanting to water down the script.

In a parallel storyline, Randy attempts to smuggle weed into the country to expand his weed-selling enterprise:

This draconian response is sadly all too typical of the authoritarian Chinese government. I mean these people even censor Winnie the Pooh because some people on the internet compared him to Chinese president Xi Jinping. How sensitive can you get?

Luckily for South Park they have enough of a following and have made enough $$$ that they can afford to piss off the Chinese government, but it must completely suck for fans of the show over there. Still, massive respect to South Park or being equal opportunity piss takers, whether it’s the Chinese government, Disney, Christianity, Scientology, Islam or big tech companies.

For 10 reasons why Randy Marsh is the best thing about South Park, click HERE.