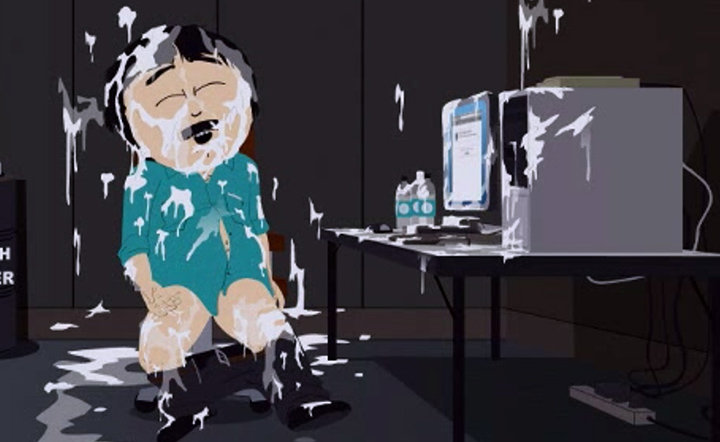 Hey Sharon, come look at this!

Before I start this, I just want to say that if you are one of those people who prefer Family Guy over South Park then please leave – there’s nothing for you here.

Anyway, now that’s out of the way, let’s talk about one of the greatest American comedies of all time. South Park is one of those shows that has progressed over time. While Trey Parker and Matt Stone started it out as a crude, toilet humour animation, has matured into a satirical, intelligent and yet ruthlessly brutal rip on current affairs and celebrity culture.

And with that progression, we have seen the characters blossom too – I mean, Kenny doesn’t die in every episode anymore and Stan no longer spews when confronted with Wendy.
But one person who deserves the biggest mention is Stan’s dad Randy. Anyone who watches the show will no doubt agree that this dude has come into his own as the series have gone on and now pretty much steals the show. Who knew that this underdog would become the main focus for not only episodes, but entire series. So we would like to make an ode to the star of South Park and round up Randy Marsh’s top ten moments. Take it away dude:

Another classic Randy episode in which he is trying to get some sort of sword to Stan during a World of Warcraft game. It’s all about Randy’s acting.

Aside from the fact that Bono is in fact a giant turd, the other best bit about this one is that Randy’s excessive consumption of P.F. Chang’s produces a constipation that creates the world record sized crap. Go on boy.

Randy Marsh recreating Cloverfield by saying “Sharon… I’m so startled” over and over again as hybrid giant guinea pigs take over the town. Enough said.

Cartman, Stan, Kyle and Kenny all get into some new version of cock fighting called ‘Cock Magic’. But while the police turn up to the kid’s home in search of the organisers, Randy gets it mixed up with the ‘Cock Magic’ he was involved in at college.

You know the one right? Where Randy purposely develops testicular cancer in order to get a medicinal weed card. Yes, he might have to carry his giant balls around in a wheelbarrow, but at least he can bun hard while he does it.

After a school karate class, Randy gets pulled over and done for drink driving meaning he has to attend an AA class, where he is lead to think that his drinking is a disease. Always the hypochondriac, Randy takes his role WAY too seriously.

Randy gets way too into the cooking channel.

I knew I had to go with one of the recent series and it was a toss up between Lord and this, but I thought I would go with the time he joins the PC fraternity house, purely for this song.

There’s too many Randy episodes to mention and I’m sure I’ve missed out a fair few. But I think that this dude deserves for me to mention the first ever episode where he came into his own (or at least, that’s what I think). If you guys remember, it was series four ‘Something You Can Do With Your Finger’.

Randy really doesn’t want the kids to be in a boy band, because of the disaster that he went through during his college days. What a banger.