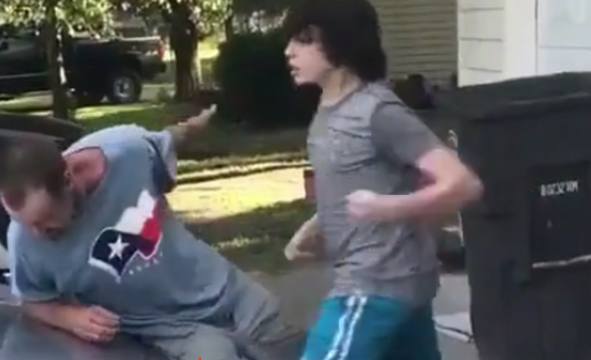 It doesn’t get much more awkward than being caught up in a racially-charged dispute between your dad and best mate, but you have to side with someone at the end of the day, and I think it’s fair to say this kid made a solid choice.

Soon as he heard his caveman dad drop the N-bomb, this young lad decided to throw a few bombs of his own.

Good stuff. A win for friendship and also a win for humanity as well. It’s almost enough to bring a tear to your eye.

Let’s just hope his dad doesn’t ground him when he wakes up from his coma.

P.S. Bonus video! Boyfriend knocks out his girlfriend’s step-dad after seeing him slap her mum across the face:

For more racists getting dealt with, watch how this guy handles a psychotic racist woman on the New York subway. Legend.