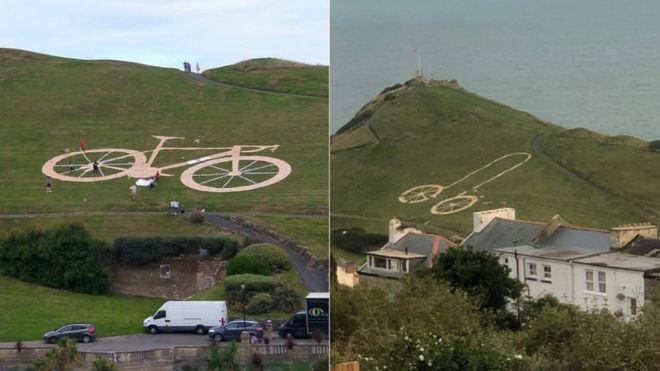 It nevers gets old.

Is there really anything funnier than drawing a dick on something or seeing some serious looking thing turned into a dick?

The answer is of course no, and this has once again been proven without a shadow of a doubt by the pictures in this article. They illustrate how a giant art installation of a bike on a hill in Ilfracombe that was created to celebrate the Tour of Britain cycle race was sabotaged by some local pranksters and turned into a giant penis instead. You really can’t beat it can you?

Thankfully project co-ordinator Seth Conway wasn’t that butthurt about the prank and said the following about it:

Ilfracombe had a rude awakening this morning.

Some people obviously thought it would be fun to rearrange the spokes and the wheels.

It’s created quite a bit of a buzz and it’s shone a bit more attention on to what the bike was there for.

I guess it’s nice of him to see the funny side of it but hey, if you can’t appreciate a great prank like this then you really are dead inside, even if it’s messing up something you probably put a lot of time and effort in. Sometimes you just gotta put your hands up and say someone did a better job than you.

For more of the same, check out this professional dick pic photographer. What a legend.