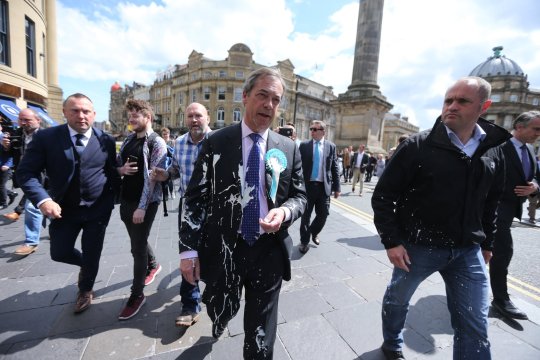 The gift that keeps on giving.

A couple of weeks ago it was really jokes when Tommy Robinson  got pelted with a milkshake twice on two consecutive days, but as much as I was hoping that this would turn into a meme it looked as though it wasn’t going to happen.

Wrong. Step forward 32 year old Paul Crowther from Newcastle, who saw his opportunity and decided to take it and hurl a milkshake at an even better target in Nigel Farage in the centre of Newcastle today, where he was appearing campaigning for the Brexit Party. Here’s what Paul had to say about it:

I didn’t know he was in town, I thought “this is my only chance”.

It was a £5.25 Five Guys banana and salted caramel milkshake.

It’s a right of protest against people like him.

The bile and the racism he spouts out in this country is far more damaging than a bit of milkshake to his front.

Appreciate the sentiment there sure, but don’t you think that spending £5.25 on a milkshake just to throw it at someone is a bit outrageous? Just pick up a cheaper one from McDonalds or something, Farage isn’t gonna know the difference and you’re not gonna be down a fiver. Just saying bro.

Anyway, apparently Farage was really upset about the incident and said that campaigning is becoming impossible due to the radicalisation of Remainers. Lol shut up mate. He was also particularly upset about the security detail and stormed off into his car shortly after being pelted with the milkshake. Sounds absolutely hilarious.

Also I’m being reliably informed that the milkshake throwing at pro-Brexit politicians is becoming so bad in the north of England and Scotland that some fast food restaurants have actually been ordered to stop selling them, so it sounds like the only option Paul Crowther had was to go to Five Guys and spend that much money. In which case that’s totally fair enough –  guy truly is a hero.

For more of the same, here’s those pictures of Tommy Robinson getting doused with one. Perfection.