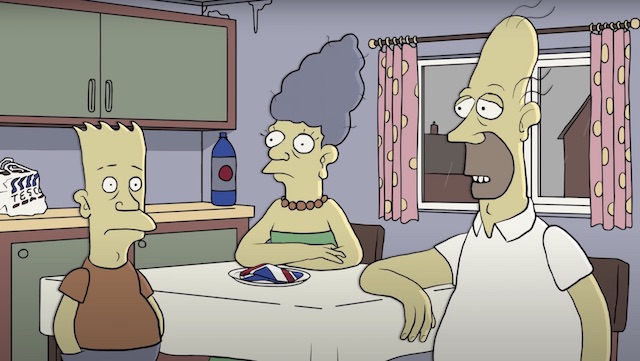 ‘The Simpsons’ might not be the powerhouse of entertainment that it once was back in the day, but the influence that it had on a whole generation of television watchers is totally undeniable, and so it’s surprisingly that there aren’t more spoofs of it out there like the one that someone has created below.

Comedian Alasdair Beckett-King has decided to reimagine the classic comedy in a British style and to sum it up he’s basically just described it as way shorter and way more depressing. You’ll notice immediately that the style is much less bright and way bleaker and the comedy follows those cues as well in this short scene between Bart, Homer and Marge at the dinner table:

Wow. That was depressing wasn’t it? It seems fairly obvious what cross section of British society that was satirising and making fun of – although it was kinda confusing how Marge spoke in comparison with the other two – but overall I think it was a pretty funny albeit kinda sad reimagining of the Simpsons characters over here as massive members of flag Twitter. Dunno if that really relates to how The Simpsons are portrayed in their native America, but I don’t think that really matters here does it?

Not really sure I want to see anymore of it though, and thankfully Beckett-King has promised not to make any more episodes of it if we subscribe to his channel and donate to his crowdfunding site Kofi. Kinda got a feeling that this could be a genius tactic from the guy to make a whole bunch of money and gain a massive following.

For more of the same, check out this recreation of ‘The Simpsons’ intro using only stock footage. Also fairly impressive.