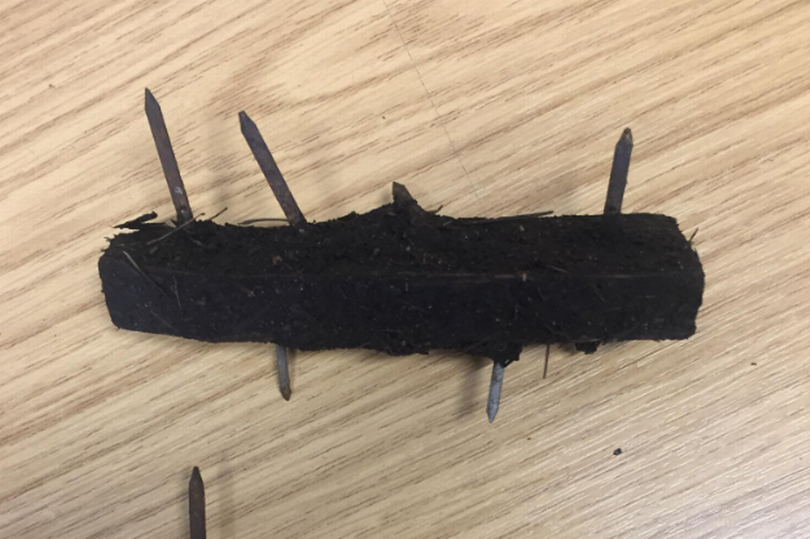 Although there are countless horror movies and TV shows out there where sadistic people leave horrific traps for people in the woods and on the streets, you would like to think that this didn’t actually go down in real life.

Unfortunately though you would be completely wrong as this story from rural Gloucestershire of all places illustrates. Apparently someone has been leaving weird logs with nails sticking out of them on footpaths in the popular wooded area of  wooded area of Coalway in Coleford in the Forest of Dean.

The police force for the local area posted the following:

These items have been placed on footpaths in the COALWAY wooded area of Coleford recently – please be aware when out walking with children and dogs on footpaths as this can cause serious injury! The investigation is on going but please be aware! pic.twitter.com/gp1ybxcoks

Yeah I mean, they are kinda weird but I’m not sure if someone has actually been putting them out there with the intent to specifically injure other people? Although having said that why don’t they just throw them in the tip or their back garden or anywhere else other than places were people are walking all the time if that isn’t the case.

Bit of a weird one – I suppose you can imagine some grumpy old hermit who hates the world crafting these weird traps hoping that some little kid would get impaled on them, but at the same time you would kinda hope if that was his plan he could make something that might be a bit more effective and actually get results? Kinda sounds like if this is the case he’s caught in the middle between wanting to actually hurt someone but not want to face the responsibility of doing so.

But what do I know? I sound like Joel Golby creating some imaginary situation and going off on one about it. Probably some farmer just dumped it there and didn’t even notice and the cops are now making a big deal about it. So it goes.

For more death traps, check out the 10 most horrific death traps from the Saw movie franchise. That’s what I’m talking about.