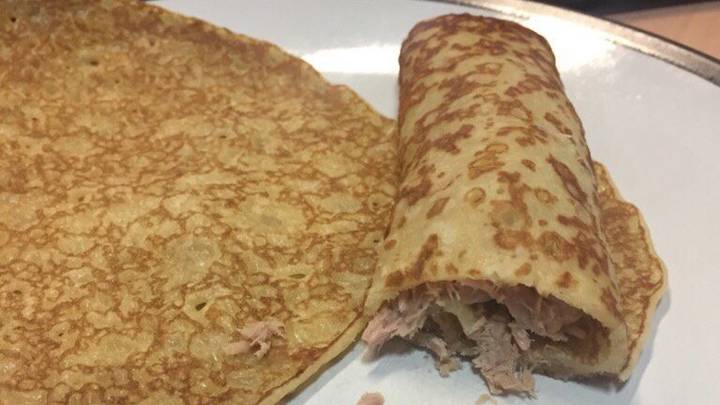 Pancake Day is a pretty fun tradition but that friendly debate over what the best type of filling to have in your pancake is always going to come to the forefront during the celebrations.

Whilst there’s a heavy argument not he savoury v sweet options, I think that most people would agree that the man who uploaded the monstrosity that you can see above this is an absolute freak of nature for choosing to fill his pancakes with tuna. Just thinking about that flavour now makes me gag a little bit because it’s just not what you want to experience at all, is it?

Ian Abrahams originally came to the attention of the nation last year when he uploads is fishy pancakes and disgusted everyone, so it probably isn’t that surprising that he’s doing it again this year. He took to Twitter to make the announcement, but managed to make it even worse than previously as he also revealed that he was eating these pancakes for breakfast? What the hell is actually wrong with this guy?

Shudder. What’s even worse about this is that I don’t think this guy is some troll because it seems like he’s a 50 year old sports commentator and reporter and with that in mind he’s probably been eating this disgusting meal for the past thirty years of his life or something. A truly barbaric way to ruin Pancake Day.

For more of the same, check out what your pancake topping says about you. Pretty useful information there.