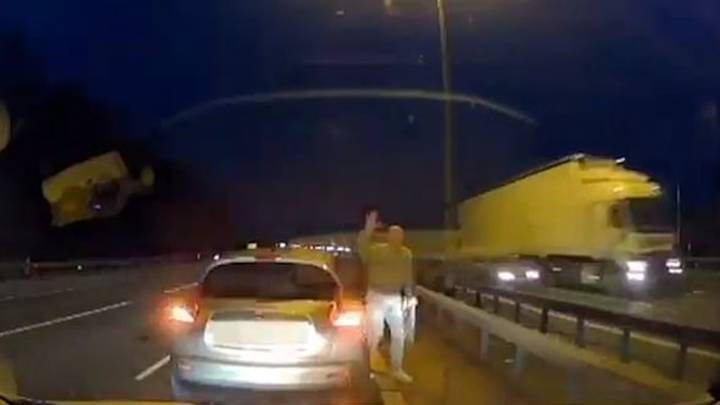 I’m pretty sure that everyone will have had a moment on a motorway where they’ve really needed to pee and the situation has almost become untenable because there’s literally so long in between junctions, but I don’t think there’s ever an excuse to stop your vehicle in the middle of the road and exit your vehicle to piss, especially if you’re on your own.

Some genius decided that there was no way he could hold onto his bladder on the central reservation of the M1 between Junction 24 and 24a in Leicester last night though, stopping in the middle of the road so that he could relieve himself. A driver behind him has the dash cam footage of him braking sharply after only realising at the last minute what was going on – it quite clearly could have been much worse as there are still loads of cars on the road travelling at high speeds.

Jack Cousens – head of roads policy for the AA – said the following:

Man got out of his car on the fast lane on the m1 motorway to take a piss yesterday night.. pic.twitter.com/AW667o2qM3

There is simply no excuse for this. It is completely and utterly dangerous and could have ended far worse.

Hopefully the driver can be tracked down and punished for his stupidity.

Yeah, Twitter really should be tracking this guy down because he’s a clear knob for doing something like that. It’s even crazier that it’s between 24 and 24a because that’s surely not even that long of a gap between junctions if it isn’t even getting a whole number there? Absolute lunacy.

For more of the same, check out when £1 million of weed was found abandoned on the motorway. Bet they’re glad nobody pissed on that hey.