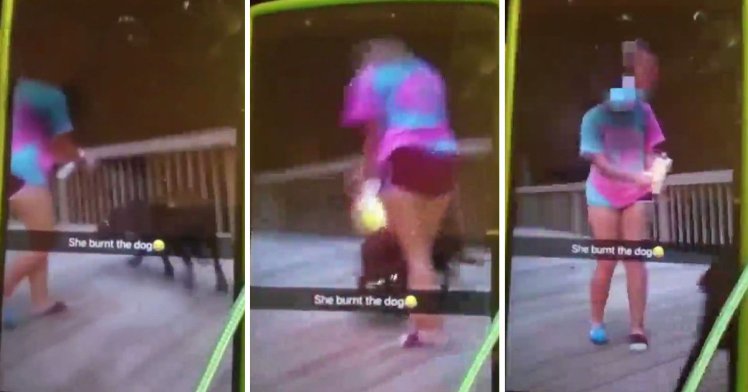 A horrific video has been released showing a teenager trying to set her dog on fire with an aerosol can and a lighter while her friend films and laughs.

Police launched an investigation into the video after it made its way onto Snapchat and social media. Since then the two girls, aged 13 and 14 from North Carolina, have been identified although they have not faced any charges as of yet. I hope they do – you’ve got to have some sick and sadistic tendencies to attack a defenceless creature like that.

The dog has thankfully been seized and is currently being cared for at the Guilford County Animal shelter. According to sheriff’s officials, the dog’s fur was singed but it escaped without major burns. Sgt. David Posten, with the Guilford County Sheriff’s Office said:

At this point I have no idea what led up to the act. I just know what we saw with the video.

We did find some small sign of injury, consistent of singed fur.

These could be very serious charges, and because of that, we don’t rush into it.

I bloody hope they do eventually punish these girls. When I was a teenager the only time the aerosol and lighter trick was funny was when you lit up a sock or someone’s armpit hair. It was dumb yes, but you were only doing it to yourself and no one was harmed. To do it to your pet dog is absolutely despicable – I hope that pup has gone to a new home with responsible and caring owners.

Those girls are just as bad, if not worse than this horrible teenager who put her pet turtle in the microwave. What’s wrong with people?