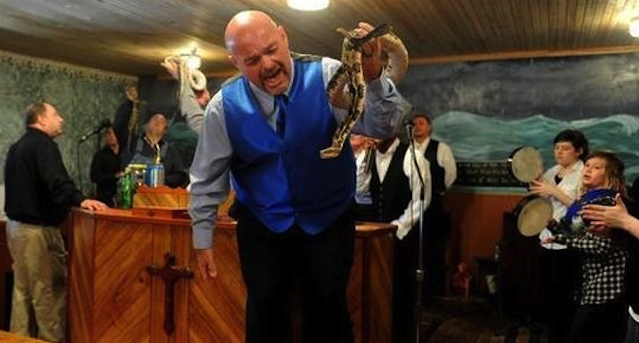 This could be one of the most ironic deaths ever.

For some reason, the National Geographic channel decided to make a reality TV show about snake handling preachers called Snake Salvation. The preachers handle snakes because they believe that God has told them to ‘take up serpents’. Sounds freaky, and it doesn’t really sound like it would be that interesting a reality show either.

In one of the most ironic events in history though, one of the stars of Snake Salvation –  a guy called Jamie Coots – was bitten by a snake and ended up dying over the weekend. The snake bit him during a service at his church –  the Full Gospel Tabernacle in a place called Jesus Name (seriously, I’m not making this up) in Kentucky.

Officials said that Coots left the church before medics arrived but they then followed him to his house because they were so worried about the snake bite. For some reason, Coots refused treatment from these medics which was probably the worst idea ever as later on that night he got a fever and died. What an idiot, although he probably thought it was some kind of religious destiny or something.

Another preacher called Cody Winn was with Jamie when he got bitten and describes how it all went down: ‘Jamie went across the floor. He had one of the rattlers in his hand, he came over and he was standing beside me. It was plain view, it just turned its head and bit him in the back of the hand before, within a second’.

Coots himself wasn’t worried about getting bitten – which is probably why he refused medical treatment – as he had been bitten by his snakes at least eight times before. It’s just one of the hazards of the job I guess, although you would think that he would know how to look after himself a bit better wouldn’t you?

â˜› More Snakes: Snake That looks Like A Giant Penis Discovered In Brazil