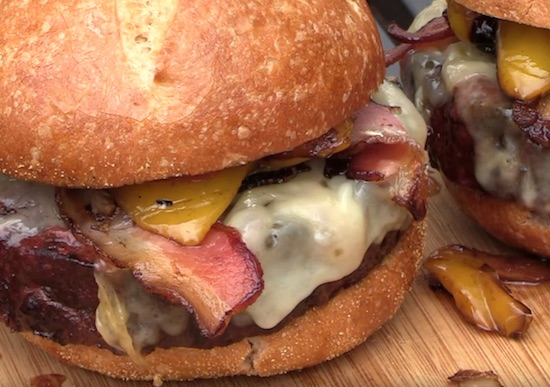 Americans sure know how to BBQ.

Say what you want about southern American rednecks, they sure know how to do BBQ food right and this video is pure evidence of that.

The video comes from the self styled BBQ Pit Boys and involves a recipe for what looks like one of the most delicious cheeseburgers I’ve ever seen: the BBQ Smoked Whiskey Cheeseburger. These boys know how to BBQ:

Man that looks good, doesn’t it? Never really thought about putting mushrooms AND peppers on a burger but I might have to do that in the future.

Not sure how the guys are even going to get their mouths around them because they’re absolutely huge, but they seem pretty experienced with their BBQing so I’ll assume they know what they’re doing when it comes to eating them as well.

I’ve gotta comment on the delivery too – he absolutely nails the slow southern drawl and the slow southern way of cooking BBQ food. Gotta love that comment about vegetarians too – “watch the vegomatics attack on this one”. Yeah, OK dude.

For more burgers, check out the Nelson’s Column burger. Only 10,500 calories.