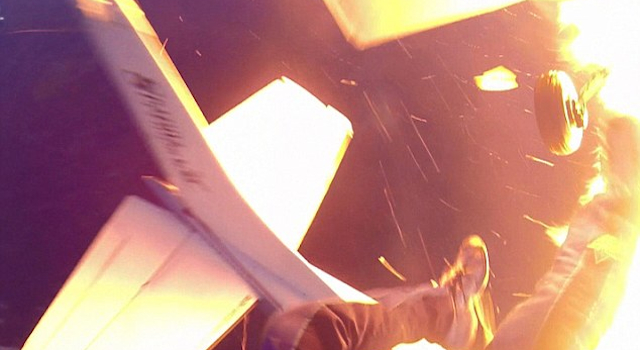 This must have been absolutely terrifying for everyone involved but it makes a pretty unbelievably awesome video.

Cameras strapped to two skydiver’s helmets were meant to perfectly capture their 12,000 foot joint parachute jump a couple of days ago in Wisconsin. Instead they captured the two planes that they were in colliding into one another in a terrifying mid-air collision that blew the parachutists away like they were matchstick men and immediately led to one plane nose diving out of the sky.

Fortunately everyone involved with the two planes – 11 people in all – managed to survive the incident, mainly due to the fact they were all experienced skydivers in the middle of a diving session. So instead of some awesome footage of two people doing a skydive that everyone has seen before the pair actually got a pretty unique video of a plane crash shot from a skydiver’s perspective, the likes of which has probably never really been seen before.

Apparently some of the skydivers were waiting to take their jump when the second plane completely flopped it and spilled onto the plane below it, knocking off an entire wing and causing a massive fireball explosion. Not what you really want to see when you’re about to jump out of a plane.

Somehow the pilot of the top plane actually managed to land it. The cause of the accident at this time is unknown but it’s speculated that there was a mechanical fault with the top plane, which is owned by Skydive Superior. Maybe make sure if you’re planning a skydive you don’t go with them.