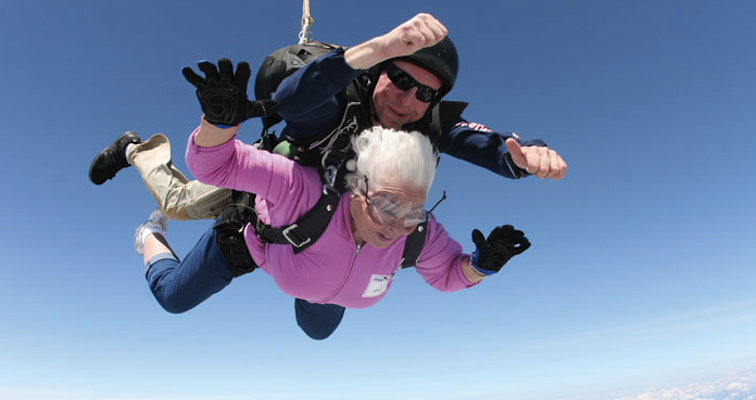 You probably don’t want the harness to break on your first skydive, especially if you’re an 80 year old grandma.

Skydiving has always been one of those things that I thought looked kind of cool, but that I don’t think I would ever, ever do. Cool me a pussy (make sure you’ve sat through some of the stuff I’ve watched on Bestgore.com first though) if you want, but I just can’t ever see myself getting in a plane and then jumping out of it. That’s crazy dude. And it’s videos like this one that only serve to further reinforce that idea.

Sure, you don’t hear much about skydiving accidents ever really, but this one could have been super serious if the instructor wasn’t so strong and good at hanging on. Basically, 80 year old woman Laverne Everett had been wanting to take a parachute jump for the past ten years at least – it was something that she had always wanted to do and today was the day.

Given that it was something that she always wanted to do though she doesn’t look very pumped when it comes her turn to jump out the plane. No siree Bob, she’s practically clawing onto the side of the plane to prevent being thrown out when she gets up there. This is particularly bad news for her though, because as she struggles at the door of the plane she starts to slip out of the harness that attaches her to the instructor – I guess because she was so old she had to do it with the instructor – and as they jump out she ALMOST slips out. Luckily for her the instructor is just about strong enough to hold onto her as they plummet towards the ground but MAN DOES IT LOOK TOUCH AND GO. It’s seriously scary. Not as scary as bestgore.com, sure, but you know it’s pretty tetchy on the way down there. It was probably even better than she hoped for in terms of exhilaration though, right?

You can check out a video of it below. The video gets extra points too because it plays The Offspring song ‘I Choose’ in the background of it.