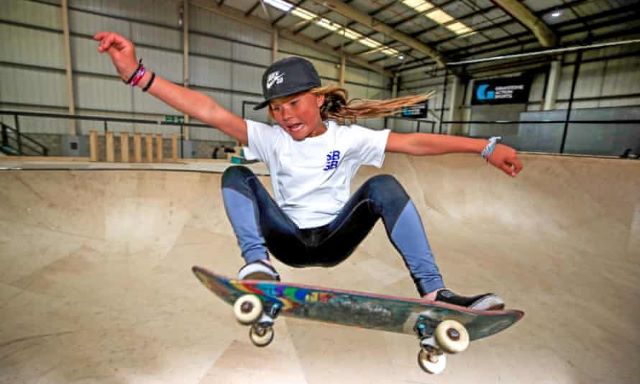 This girl is immense.

Athletes train their entire lives to get to the Olympics, putting in countless hours of blood, sweat and tears to break through the ranks and compete on the ultimate global stage. And when they do finally make it, there’s usually a chance it will be their one and only time participating in the world’s most prestigious competition.

Meanwhile, you’ve got 12-year-old Sky Brown who is set to become Great Britain’s youngest ever Olympian at this summer’s Tokyo Olympics (well OK she’ll be 13 by the time the Games start, but still)…

After today’s announcement, at the age of 13 years and 11 days, Sky Brown is set to become our youngest ever summer Olympian. 🙌👌

Who’s looking forward to watching her perform at the Olympics?! 🎊🛹#TeamGB #Skateboarding pic.twitter.com/3vL2pihXaG

Never mind that Sky is only half-British and has never actually lived in Britain; she’s representing Blighty and that’s all that matters.

If these clips are anything to go by, she’s gonna smash it too…

…Sky Brown is killing it. 🛹

Today’s lesson in perseverance:
Sky Brown’s brutal McTwist battle. You can’t teach this kind of determination; it comes from someplace deep within. pic.twitter.com/tFFiCXY3Jz

Yup, that’s right – she’s even been bigged up by Tony Hawk. When the rest of us were Sky’s age we were sat on our butts playing Tony Hawk’s Pro Skater, meanwhile Sky Brown is out here actually pulling off those same moves IRL on the same halfpipes as the legend himself.

ICYMI: ‘Girls can do anything that boys can do – or maybe even better’: Meet skateboarding prodigy Sky Brown, who has her sights set on the Tokyo Olympics https://t.co/1ZyQ2hZkIw #Tokyo2020 pic.twitter.com/b5BYcgBLen

To watch a dude stick & land an insane skateboard trick that leaves the cops rubbing their eyes in disbelief, click HERE. Seriously WTF?