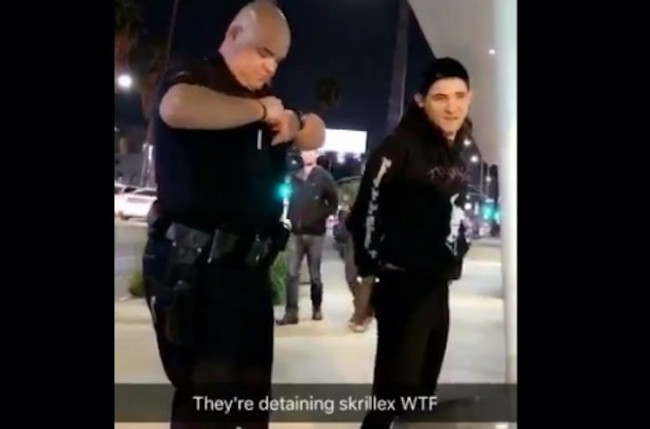 Despite blowing up hugely in music a few years ago, we haven’t really heard much from Skrillex recently in the media. That all changed last night though when a fan tweeted a video of him being arrested in Hollywood.

The video isn’t really that clear about what he’s being arrested for, but apparently he was playing music too loud in his car which caused him to be pulled over. When he didn’t have his license on him, he was arrested and placed in the back of the cop car whilst they checked him out.

The clip gets even weirder when you hear Skrillex music being played in the background and you start to wonder – was Skrillex pulled over because he was blasting his own music so loudly in his car? Surely not:

Ok yeah, I mean it’s probably more likely that someone just put on Skrillex really loudly when they saw what was happening to make the situation funnier, but it’s still kinda lolz to think of Skrillex driving around pumping out his own songs in his car, right?

If you were worried about Skrillex, apparently the situation resolved itself fairly amicably and he was allowed to go and DJ at his friend’s party. Phew – imagine how devastated people would have been if they had missed that set. Worst birthday party ever.

For more Skrillex, check out when he accidentally set his hair on fire from his own birthday cake. Guy can’t catch a break.