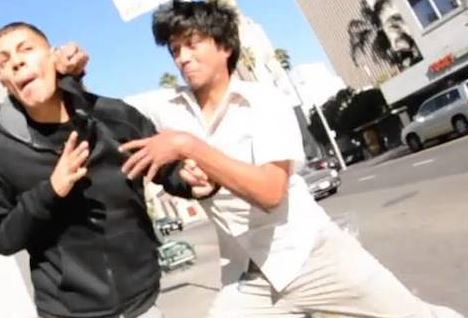 Another day, another ultimately unnecessary scrap for the internet fight vault – this time between a teen skateboarder and a homeless crackhead who wants him to go skate somewhere else.

This is my homie Mikey Ramos he was just trying to skate this spot but this asshole was being a douche so he fucked him up haha. It was self defence.

Not sure I’d call it self defence but clearly things only turned physical because the crackhead grabbed the kid’s skateboard and smashed it on the ground and then threw it at him. Biggest disrespect move you can pull on a skater really.

Still, it’s not very nice seeing some bum (or anyone really) get dashed to the ground and get his arse kicked like that. Much less uploading the video and boasting about it after.