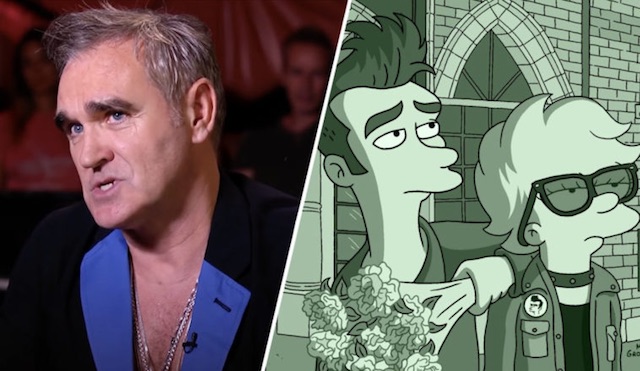 ‘The Simpsons’ probably received way more interest than it ever has in the last few years a couple of weeks ago when Morrissey decided to call out a character that was clearly based on him as ‘racist’ and now the show has decided to clap back by releasing a parody song about him.

Morrissey was annoyed after Lisa’s eccentric 80s singer friend Qilloughby – who was obviously a caricature of him – appeared on the show. Qilloughby said that he enjoyed nothing, and was portrayed as an overweight racist returning for one last gig with his band ‘The Snuffs’ and this obviously offended Morrisey – what doesn’t? – and caused him to sort of threaten to sue ‘The Simpsons’ as well, in a typical offhand Morrissey kinda way.

Anyway, never to be deterred ‘The Simpsons’ decided to double down on their rinse by releasing the following song sung by Benedict Cumberbatch – who voiced Qilloughby – and Yeardley Smith who has communicating as Lisa Simpson for the past 30 years. ‘Flight Of The Conchords’ Bert McKenzie was also involved and the results are pretty great in terms of their objective of mocking the hell out of Morrissey:

Yeah they pretty much nailed that didn’t they? Maybe ‘The Simpsons’ is experiencing a bit of a renaissance and I should tune in for a new episode some time to see what’s been going on for the last 20 years? Lol, good one.

As for Morrissey, I really hope he does become the first celebrity to sue ‘The Simpsons’ for their portrayal of him because it would totally cement his status as a complete and utter prick these days. Someone needs to tell the guy to give it a rest.

For more of the same, check out this reimagining of ‘The Simpsons’ as a bleak British comedy. Actually pretty decent.