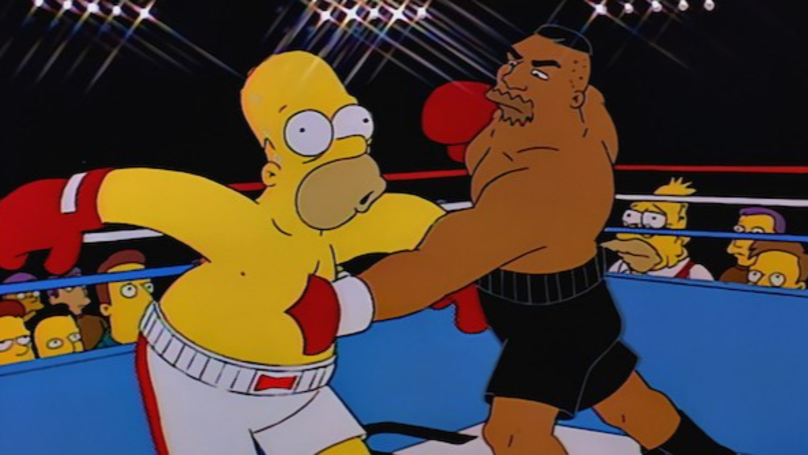 Did they do it again?

Boxing saw one of the greatest upsets of all time on Saturday night, when undefeated heavyweight Anthony Joshua was stopped by unfancied Mexican fat boy Andy Ruiz Jr.

Whilst many say that you could never have predicted this happening given Joshua’s career so far, people are point at the The Simpsons and saying that they almost certainly did, much like they have done so may times before. This time they’re looking at the episode ‘The Homer They Fall’ where Homer somehow ends up in a boxing match against a Simpsons version of Mike Tyson named Drederick Tatum.

Homer also ends up with the victory over Tatum, taking a load of punishment as Tatum wears himself out and is ultimately so knackered that he can just punch him over with his little finger:

OK so it’s not exactly the same as the Joshua Ruiz fight, but it is an overweight guy who doesn’t really look like he should be a boxer beating an undefeated champion when nobody really gave him a chance. Given how The Simpsons has predicted everything from the Game Of Thrones ending to the Donald Trump presidency though, we can’t really rule this one out. How do they keep doing it every time?

For more of the same, check out this university course that is dedicated to explaining how The Simpsons predicts the future. Wait, what?