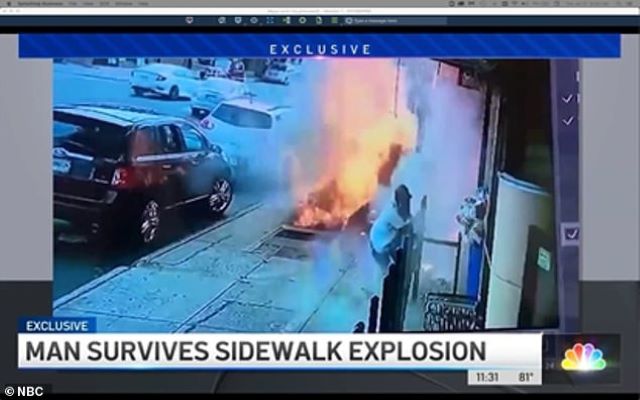 A 57-year-old Queens man named Barry West was on his way to pay his cellphone bill (there’s such a thing as paying a cellphone bill in person?) when suddenly – BOOM – the sidewalk literally exploded underneath him.

Barry managed to pull himself away from the flames and thankfully, survived:

This is nuts! A sidewalk explosion in St Albans, Queens. Thankfully, the brother is OK and recovering.

Reason no. 1 Billion why I fear walking over those grates. pic.twitter.com/C1tnFBNHdJ

Why the f*ck is a sidewalk just exploding like that? Beats me. But apparently New York City has free steam for heating that gets sent through tunnels across the city, so these drain grates are often letting out steam, which means no one would have even seen this coming.

I don’t remember too much. It was ‘BOOM!’ out of nowhere …. I wasn’t able to move and it hurt like hell. I lost some skin all over.

The flames pushed me out of the fire itself. When did I realise what happened? After somebody told me, ‘Don’t move, stay right there,’ and called for help.

This guy has a theory as to what may have happened:

It could very well be an underground vault transformer blowing up. It this is in NY, its probably a very old one just like the ones in LA.

One thing’s for sure – there’ll be no shortage of lawyers contacting Barry right now and begging him to let them handle his case. The guy’s looking at potentially millions in damages from the state of New York. Given he didn’t suffer any life-threatening or life-changing injuries, it’s almost enough to make you jealous. Roast me like a hotdog for £250k, let alone whatever he’ll be getting.

To watch a man survive a horrific car bomb explosion in an assassination attempt gone wrong, click HERE. How?