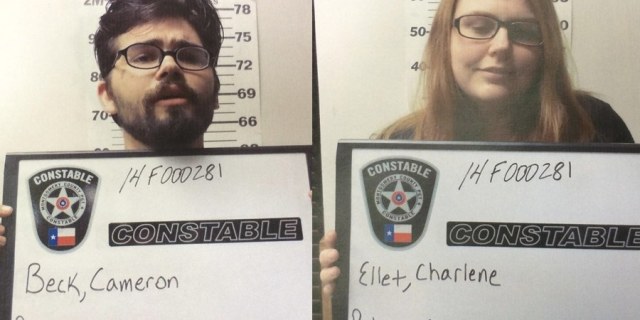 I doubt anyone could have expected this story to escalate how it did once a guy got picked up for shoplifting at his local Wal Mart in Porter, Texas.

Talk about things going from bad to worse to pretty much completely fucked up in a matter of hours.

It all started when Charlene Elert, 25, got picked up for shoplifting at her local Walmart in Porter, Texas. Her brother – although apparently the two have different fathers – Cameron Beck, 26, came looking for her at the loss prevention office and the cops decided to search his car for some reason.

He was probably tweaking or acting suspicious because it turns out that searching his car was a pretty good idea as they found a lightbulb and a cut pen in the car, which both tested positive for crystal meth. The pair soon admitted to having smoked the meth a couple of weeks ago and got taken to the local police station to get booked.

This was when things got really weird, as the brother and sister were placed in adjacent cells but police soon noticed that they were making out between the jail bars. What? I mean even if you were with your girlfriend that would be a bit of a weird thing to do, but when you’ve just told police that you’re brother and sister that is 100% not a good move and frankly just kind of stupid.

I mean couldn’t they have waited a little bit longer until they were in a private location? Morons. Although I guess if you’re banging your sister/brother you’re not exactly going to be the sharpest knife in the drawer are you?

The pair were then questioned separately and admitted they were in a sexual relationship that began last November after Beck had been released from jail and moved into a hotel room with Elert and her 2 year old twin daughters. Elert explained that they put up a partition or went into the bathroom when they boned each other so that the kids wouldn’t have to see, which is remarkably considerate when you think they were probably spaced out on crack when they were doing this.

As having sex with your half sibling is illegal in Texas, the two were charged for that offence too and remain in custody. Elert’s daughters were given to her sister, which is hopefully a better environment than the one they were currently inhabiting.