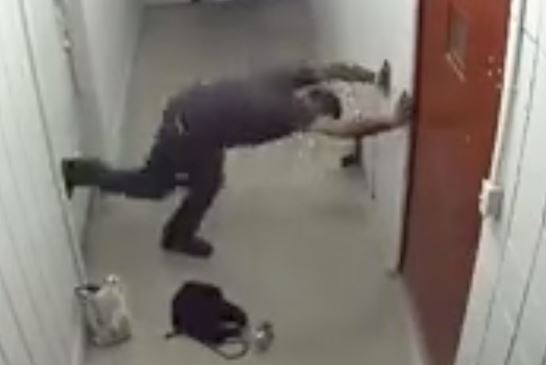 You can feel this guy’s panic through your screen.

The story goes that this shop owner kept getting burgled by someone sneaking in through the air vents. He decided to set a trap that would keep the burglar locked inside the property while the police arrived.

In the meantime, he kicked back and watched the burglar hit peak stress levels as he desperately tried to find an escape route:

So much panic, I bet part of him was relieved when the cops showed up. Still I reckon the shop owner could have left him in there a bit longer. Maybe set up some elaborate SAW-style traps and just generally have a bit of fun messing with the guy. Then when you’re done tell him he’s free to go and open the doors to have him find a crew of cops waiting. Missed a trick there but still, a fairly satisfying revenge story.

P.S. Probably preferable to what this shop keeper did to the guy he caught stealing from him.