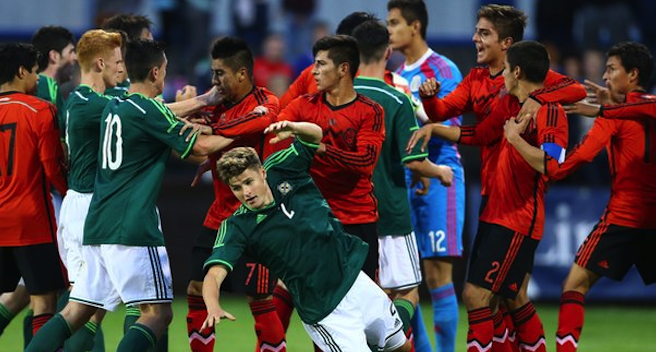 You’ve never seen anything like this Mexican guy kicking the Irish guy in the head.

Mexico were playing Ireland in the Milk Cup – which is some tournament for U20 players apparently – when this brawl erupted halfway through the second half.

Fights in fotboll aren’t really that uncommon but this is really something else: the match had to be stopped for five minutes to get it all under control as every single player from both teams was involved, as well as some players from the bench too.

Some of the moves are brutal – there’s a particularly nasty punch in the face from one Irish guy to a Mexican dude but the kicked (literally) is when some Mexican dude runs and kicks an Irish guy who’s on the deck extremely hard in the back of the head. Oof.

The game had to be called off following the brawl and three Mexican and one Irish player were sent off. FIFA have promised a full investigation into the incident and it’s expected that Mexico won’t be invited to participate in the Milk Cup anytime soon. No shit huh? Maybe if things don’t work out for their football careers they could try and go into Historical Football over in Florence, which is pretty much like a footballing version of Fight Club.