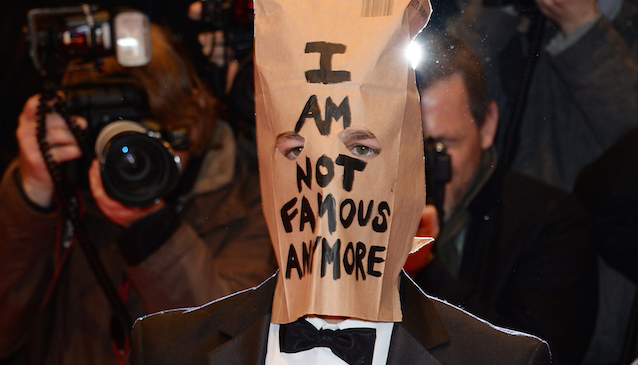 He couldn’t talk about it or tell anyone as he was sworn to silence throughout the five day piece.

Remember when Shia LaBoeuf was being a complete weirdo earlier this year? Yeah, it’s easy to forget I know but basically he went around just being even more of a moron than usual wearing a paper bag over his head at film premieres and head butting people in London pubs and shit.

As part of this display of him losing the plot, Shia took part in a five-day piece of performance art where he lived in a small room in the Stephen Cohen Gallery in Los Angeles with a  paper bag on his head that had ‘I’M NOT FAMOUS ANYMORE’ written on it. Guests were invited to line up outside the room and allowed to tell him exactly what they thought of him in the small room which was probably a lot of fun for the guy.

Or probably not, especially when Shia’s recently revealed that one female visitor went so far as to rape him during his time trapped in the room. Because Shia wasn’t allowed to speak during his time in captivity, he couldn’t even tell anyone about it. Shocking. Here’s how he recounts the story:

One woman came with her boyfriend, who was outside the door when this happened. [She] whipped my legs for 10 minutes and then stripped my clothing and proceeded to rape me.

There were hundreds of people in line when she walked out with dishevelled hair and smudged lipstick. It was no good, not just for me but her man as well.

It was Valentine’s Day and I was living in the gallery for the duration of the event. We [he and Goth] were separated for five days, no communication. So it really hurt her as well, as I guess the news of it traveled through the line. When she came in she asked for an explanation, and I couldn’t speak, so we both sat with this unexplained trauma silently. It was painful.

I don’t really know what to say about that. There are so many things that are ridiculously stupid about it I’m not sure it’s even worth commenting on. Firstly, the whole performance art thing is obviously stupid and secondly just because he couldn’t speak doesn’t mean he has to let himself get raped? Kinda sounds like Shia hasn’t done anything stupid for a while so he just made up something stupid to get himself in the news again. Guess it worked to be fair.