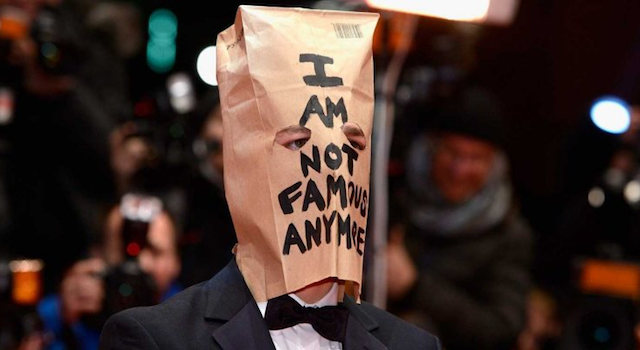 The actor quoted Eric Cantona in a press conference before storming out, then wore a paper bag with the words ‘I’m Not Famous Anymore’ written on it to his movie premier.

Shia Labeouf has been acting weird ever since everyone found out that he was set to star in Lars Von Trier’s new film Nymphomaniac. Nobody is really sure if he’s genuinely having a meltdown, if working with Lars Von Trier has had such a profound affect on him that he’s seriously considering his role within the movie business, or if it’s just a clever marketing ploy to draw attention to the movie. Either way, everything he’s doing is fairly entertaining and his antics at the Berlin Film Festival could be the most entertaining yet.

There are two parts to this story (so far – there will probably be even more by the time it’s posted) and the first takes place at a press conference for Nymphomaniac with Labeouf and his co-stars Christian Slater, Uma Thurman, Stacy Martin and Stellan Skarsgard. It was all going fairly well as Labeouf was silent for around ten minutes until the cast were asked by a reporter if they were worried about releasing a movie with so many unsimulated sex scenes.

Labeouf replied: ‘When the seagulls follow the trawler, it is because they think sardines will be thrown into the sea. Thank you very much’. He then stormed out of the press conference, seemingly to the surprise of everyone else from the movie situated around him.

The quotation can be attributed to Eric Cantona, who famously uttered the phrase at a press conference following his infamous kung fu kick on a Crystal Palace fan. Nobody knew what it meant then, and I’m pretty sure Shia Labeouf doesn’t know what it means now, but I guess he’s trying to be as cool as Eric Cantona was back then by using it. Not sure if he’s succeeding but I definitely think he’s a bit cooler now than I did before he started acting out with all this weird behaviour, so there is that I guess.

Later on, he then showed up to the premiere of Nymphomaniac Part I with a paper bag over his head with the words ‘I’m Not Famous Anymore’ written on it. Shia has been tweeting this phrase every day for the past month for some reason. I guess he’s trying to make some kind of statement about being in art house movies as opposed to major blockbusters now and how it’s opened his eyes to the world of serious filmmaking or something. Or it could just be a publicity stunt. What do you think?