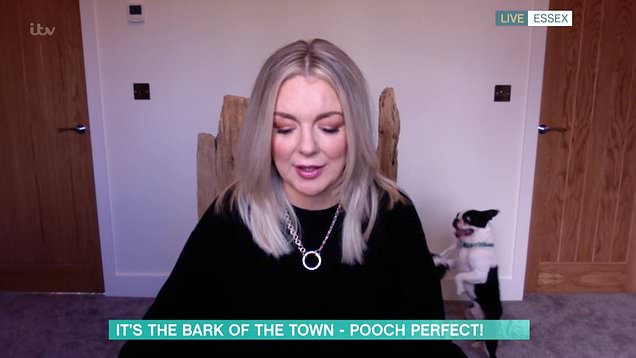 It looks as though we’re going to be subjected to Zoom interviews on our current affairs television programmes for the foreseeable future after we were plunged into a lockdown with no scheduled end and so that of course means that we’re going to see a whole load of new bloopers because of it. Stoked.

We’re gonna be hard pressed to find one better than this one though, as Sheridan Smith’s interview on ‘This Morning’ today with Holly Willoughby and Philip Schofield was interrupted by her two dogs having sex in the background. That’s not really something you even see on regularly scheduled television or in real life, so obviously everyone involved was a bit embarrassed/awkward about it happening.

Take a look at the clip below:

Lol that really is awkward isn’t it, although the cynic is me is kinda thinking that maybe it was planned to get more publicity for Sheridan’s new BBC show about dog grooming ‘Pooch Perfect’ because it’s definitely going to receive more now that this clip is going viral? Not really sure if Sheridan could have feasibly instigated that herself in advance though, but I guess if anyone could then it would be someone with her knowledge of dogs.

Jury’s out, but I hope all the viral Zoom clips are as good as this and not some variation on the old child walking into the room trope. Really saw enough of that during the first two lockdowns.

For more of the same, check out this video showing a woman explaining why she thinks all girls should have sex with dogs. What?