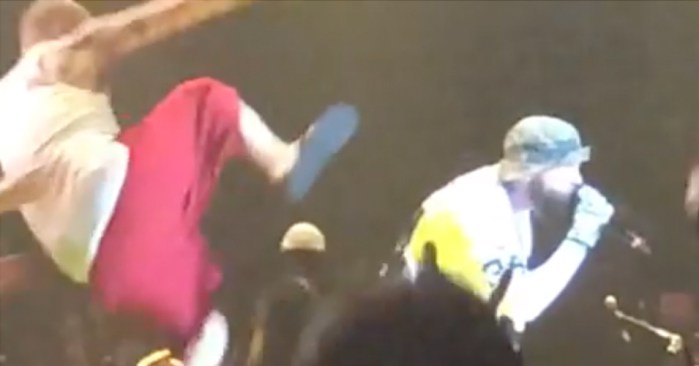 It feels like it’s been a while since I saw two bands that legitimately didn’t even like each other beefing in the media, but thankfully it looks like two of the classic bands from the late 90s are coming back to sort that out.

Apparently Insane Clown Posse and Fred Durst have had beef ever since Woodstock 98 when Fred said he wanted to meet them after Limp Bizkit’s set but they refused because they didn’t know who he was. Burn.

Even though this was 20 years ago, the bands still don’t seem to be able to see eye to eye with one another and this was illustrated over the weekend when they were both playing at the Rock Allegiance Festival in Camden, New Jersey. Limp Bizkit were finishing their cover of George Michael’s faith when Shaggy 2 Dope stormed the stage and tried to dropkick him, only to fail dramatically and then be dragged off stage by security:

Wow – that is really embarrassing of him isn’t it? I mean how do you screw up giving someone a dropkick that badly, especially when you’ve ran onto stage to deliver it to them. Completely lame dude and only serves to add further scorn to the Insane Clown Posse. They really are one of the silliest bands around aren’t they and this kinda just cements that issue doesn’t it?

For more of the same, check out how they reacted when they were named the worst rappers of all time. They weren’t happy.