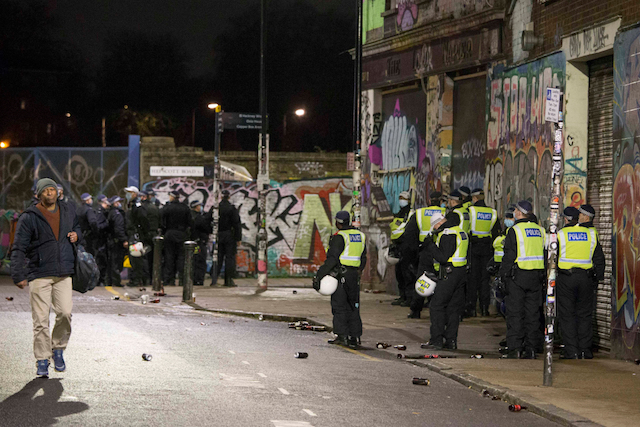 London plunged into Tier 3 a couple of days ago, but it seems like some of the population aren’t that happy about the situation with hundreds of people apparently descending on a pub in Hackney Wick last night to continue drinking with their friends.

Police quickly gained wind of the situation and headed down there to break it up and in the end they had to form a human barrier in order to stop people from getting to the pub, although there’s a video of some people breaking through it and running down the streets. It looks like a really serious situation basically from the videos that have appeared on social media.

What is wrong with the Heathens in #Hackneywick ? 🎥@annamgoo #Tier3 #London pic.twitter.com/80srDVJNek

Really disappointing this is happening given many Londoners are all doing their bit to help communities stay safe.

Metropolitan Police will continue to try to explain and encourage compliance with the regulations but enforcement action shouldn’t have to be taken.

Officers attended White Post Lane, E9 this evening after a large group of people gathered at a pub.

Officers engaged with those present to encourage them to disperse, in line with current Coronavirus legislation.

Seven people have been arrested for offences under the health protection regulations. No reports of any injuries.

Crazy. It turns out that so many people were showing up there because it was someone’s wake, so they all descended on a pub doing takeaway beers after the funeral – which presumably only 30 of them were allowed to turn up to? – and I think that probably would have been OK if they stayed in groups of six outside. Evidently though with the alcohol flowing and due to the nature of the occasion this wasn’t the case, so the police felt it necessarily to step in and break it up.

Really dumb that it turned violent and people were arrested because of it, but I guess that’s what happens when alcohol is involved and people feel oppressed by dumb government rules or whatever. Can’t wait to see what happens on New Year’s Eve.

For more of the same, check out these riot police battling the East London youth after a party gets out of hand. Been going on even before the virus.