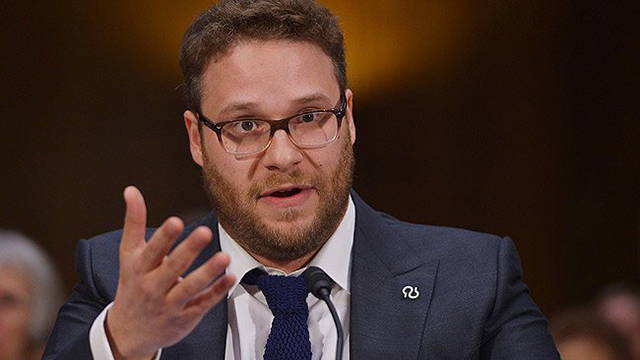 Seth Rogen fires back at a columnist who suggested his films were to blame for Elliot Rodger’s senseless shooting spree last Friday.

If you haven’t seen the video where Elliot Rodgers attempts to articulate his reasons for going on a mass murdering rampage last Friday, you can watch that here.

Somehow, a film critic for the Washington Post named Ann Hornaday wound up implying that Seth Rogen and Judd Apatow films are to blame for what happened in Santa Barbara. Here’s an excerpt from what she wrote:

‘How many students watch outsized frat-boy fantasies like Neighbors and feel, as Rodger did, unjustly shut out of college life that should be full of “sex and fun and pleasure”? How many men, raised on a steady diet of Judd Apatow comedies in which the shlubby arrested adolescent always get the girl, find that those happy endings constantly elude them and conclude, “It’s not fair”?’

‘If our cinematic grammar is one of violence, sexual conquest and macho swagger – thanks to male studio executives who green-light projects according to their own pathetic predilections – no one should be surprised when those impulses take luridly literal form in the culture at large.’

You can read the whole thing here.

So glad she’s cleared that one up. All this time we thought the cause of the horrible tragedy at UCSB was down to mental illness/mysoginy/easy access to guns/a long history of psychiatric issues but nope, turns out the blame was with Judd Apatow comedies starring Seth Rogen all along. Watching a fat stoner fuck like Seth Rogan get the girl is just too much to bear for the sexless youth of America. That’s what’s really fucking up young people today — ridiculous stoner comedies that trick you into thinking that average joes can get laid by having a sense of humour and treating women with respect.

Hope Hollywood have learnt their lesson on this one. Leave all the lady-slaying heroics to Brad Pitt and Matthew McConaughey, otherwise you’ll set off the psychos who thought that if Rogen can get the girl, they can too.

Obviously, Rogen wasn’t best pleased with Hornaday’s write-up and let her know it:

.@AnnHornaday I find your article horribly insulting and misinformed.

.@AnnHornaday how dare you imply that me getting girls in movies caused a lunatic to go on a rampage.