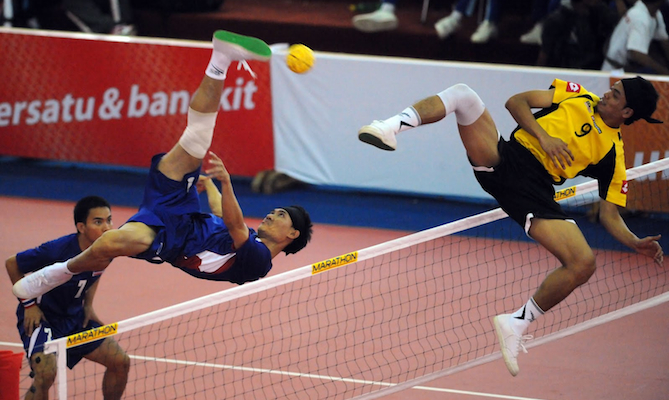 Sepaktakraw is a crazy sport from Indonesia which is best described as a version of football volleyball that encourages you to hit a bicycle kick every point. It’s pretty out of control crazy.

Shout out to Dan Le Mayo for pointing this video out to me because it is completely sick. Maybe not as sick as Bearcup but it’s a different kind of unvelievable. Like Bearcup was really cool because it was so violent and didn’t make any sense, whereas Sepaktakraw is just unbelievable because I can’t believe that firstly anyone could create this game and secondly that there are a bunch of people that are actually skilful enough to play the game. It’s crazy.

It’s basically a version of football volleyball. I’m sure everyone who has ever kicked a ball has had a go at playing football volleyball or football tennis at some point in their life. The premise is simple, you have to keep the ball up in the air and hit it over the net to the opposition team to score a point. This is hard enough when you’re playing actual volleyball but when you’re using your feet it’s especially solid and whenever I’ve tried to play in the past we’ve been lucky if we can even manage one rally. Of course that could be indicative of mine and my friends’ footballing ability but I think whenever I’ve seen anyone try and play this game they’ve struggled. Except for these sickheads who played on the Copacabana beach over in Brazil who just absolutely nailed it, but they’re Brazilian so you know they’re bound to be sick at football. Or football volleyball, whatever.

â˜› Check This Out Next: Bearcup Is Pretty Much Football Crossed With UFC

Sepaktakraw takes it to a whole different level though. As well as having a name that is almost completely impossible to pronounce, it also looks like it would be completely impossible for a regular person to play. Like I said, it’s basically football volleyball but it looks as if you’re encouraged to hit as many bicycle kicks and jumping volleys as possible during a game. I can’t even hit a bicycle kick if I’m having a kickabout with my mates so the thought of hitting one every other shot in this game is just mindblowing. It’s also pretty nuts how they jump up at the net to try and block stuff by throwing their whole bodies and legs in the way. It’s completely mental as well that they’re playing on a hard court too so are constantly slamming themselves into it after each shot. Surely that is going to kick your ass something raggo right? These guys are seriously athletic/flexible and it’s crazy. I can’t see it ever taking off in the UK for that reason alone, it’s great to check out videos of it though.

â˜› Watch This Next: Top Ten Bicycle Kicks Of All Time

I had a look into it and it turns out the game was founded over in Indonesia and is still pretty popular over there. It has actually spread all over the world though with federations recently popping up in Canada and the United States. Hopefully it isn’t long before it gets recognised as an official Olympic sport so we can watch awesome rallies and games like the one below all the time. Well, I guess not all the time but once every four years or whatever. It would probably take the spot of beach volleyball as my favourite Olympic sport if it did make it.

Here’s a match from something called the Vigo Cup in 2011 which is just insane. I can’t even describe some of the stuff they’re doing so I’ll just let you watch it. It’s crazy how they’re just so nonchalant and whatever about playing though and all the stuff they’re doing. I guess they do it all the time but I mean still, it’s nuts: