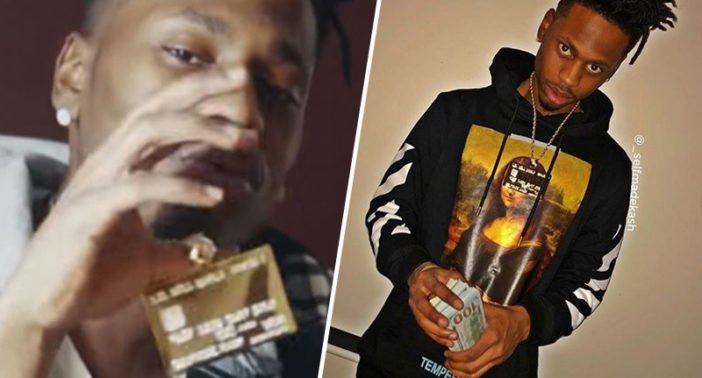 Ever heard of Detroit rapper ‘Selfmade Kash’? Me neither. But it turns out he isn’t very ‘selfmade’ at all because he’s just been charged with wire fraud, aggravated identity theft and possession of unauthorised access devices.

The funniest thing about Selfmade Kash is that he wears a jewel-encrusted gold credit card on a chain around his neck and even boasts about committing credit card fraud in his songs. I mean how stupid can a person get?

He once bragged on a Detroit radio show:

A lot of people come to me saying, like, bro, you gonna get indicted!

25-year-old Kash would also frequently post pictures and videos on social media of himself posing with large amounts of cash and credit cards. Smart! He would also use emojis of credit cards and hashtag those photos/clips #bins #bitcoins #ScamLikely and #dumpswithpin.

Get a load of this twat:

As Kash faces 20 years in prison, prosecutors absolutely rinsed him in their indictment:

Jonathan Woods (AKA Selfmade Kash) claimed to be sophisticated at credit card fraud when, in fact, he is not.

Seems more the kind of guy that will try get you involved in one those pyramid schemes rather than a big time credit card hustler. It’s so funny how he was trying to big himself up as some kind of genius scammer only to wind up facing 20 years in prison and have the prosecution completely crap on his hustling skills in court.

Do these plonkers really think they’ll never get caught or is that part of the plan on some subconscious level? Just like that other rapper whose own lyrics about murdering someone were used to convict him in court. What a pair of doughnuts.