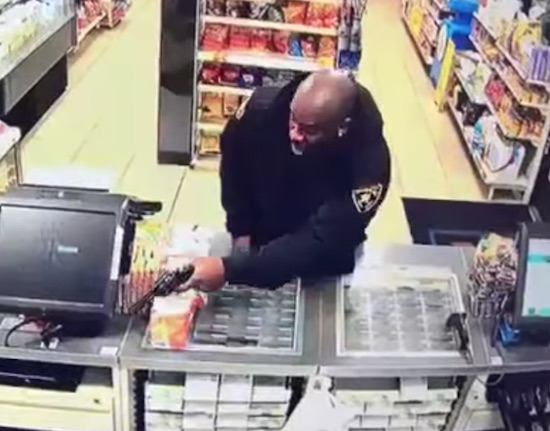 Don’t mess with an original gangster.

It seems like convenience stores get robbed every day over in America and security guards usually don’t really do that much to stop this from happening.

Not in this video though because the security guard in this one is straight up not messing around one single bit. Unsure where the video originates from, but it features two guys who don’t look like they’ve ever robbed a convenience store before – one of them can’t even jump over the counter on the first attempt – using fake guns to hold up the cashier.

Unfortunately for them, the security guard bursts straight in and doesn’t even bother asking them to stop or put their hands up before he shoots them both like it ain’t no big deal. They’re not dead because he aimed pretty well – not actually sure if he hit them or just fired to scare them – but either way this is a complete and utter badass way to stop a robbery:

Damn, that is some straight up gangster shit. There ain’t no way those two guys are doing anything except getting picked up by the cops and heading directly to jail. Pussies.

For more of the same, check out this security guard shooting two guys who who found urinating in the car park. Not quite as cool.