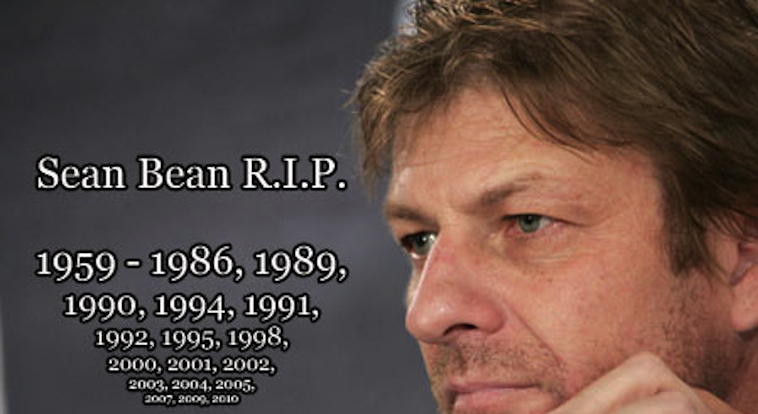 Sean Bean has died. A bunch of times.

Sean Bean is one of those guys, you know like Dustin Hoffman or Alec Baldwin or someone like that.  Like, everyone knows who they are, but you can’t really name that many of his roles or what movies they’ve been in. Go on try it. I got Dustin Hoffman in one of those party games and I had to list ten of his films and after The Graduate, Rain Man and, um, Outbreak I was screwed.

But yeah, Sean Bean. Sure there’s Sharpe and that guy from Lord of the Rings and of course Trevelyan (although that is probably more famous because of the iconic Goldeneye videogame rather than the movie) but what else is he in? That stupid vigilante movie with Danny Dyer? Game of Thrones? Was he in that movie Ronin? I don’t know. See what else you can name without checking IMDB, I dare you.

So yeah, unless you’re a staunch follower of Sean Bean’s career – which I doubt many of you are – you might be surprised to hear that it looks as if he’s had more on screen deaths than almost anyone else. And they’re all pretty inventive on screen deaths. They’re so great in fact that somebody decided to make a mashup of all 22 of them. I have no idea what the majority of the movies are (although there is the Hitcher with Sophia Bush who has to be one of the biggest babes ever) but some of Sean’s deaths are spectacular –  being pulled apart by horses, being trampled to death/pushed off a cliff by a herd of cows and being shot by Christian Bale are some of my favourites. Check out the video below and let me know what your favourite is.

If you want to let me know any more Sean Bean movies and if any of them are any good then do that too.