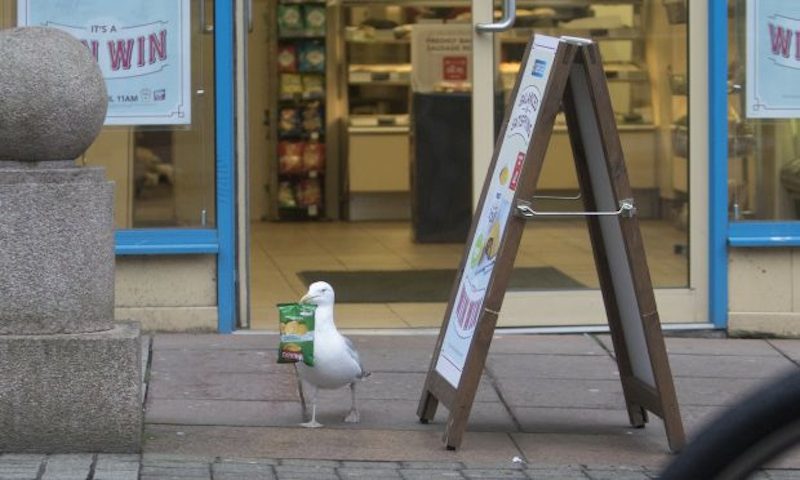 A shoplifting seagull over in Scotland has been terrorising a Greggs bakery by stealing from the shop in Abroath up to ten times a day.

Despite his menacing behaviour, the staff have vowed that they will, “never call the police on him,” and they’ve even given him a name: Steven Seagull.

You can see him in the video below, swooping down before brazenly walking into the shop and picking himself up a bag of crisps.

26-year-old Lyndsay Crown, who works at the Greggs store, said:

We’ll never call the police on him.

He loves crisps but he’ll take what he can – he flew off with a pack of six rolls. We try to stop him but he’s usually too quick.

Meanwhile, Ashleigh Walton, 24, said of the seagull’s reign of terror:

Steven has no fear. We have to keep a constant eye out for him.

He must be our most loyal regular – he’s here all day, every day.

I guess he would be if he paid. Perhaps he should start earning his food – I’m sure the shop would gain a lot of customers if they had a seagull working behind the till. What a tourist attraction that would be.

To be fair to Steven, he’s not causing too much trouble. As least not compared to this gang of coked up gulls who kept a street awake for three days solid. Lads.