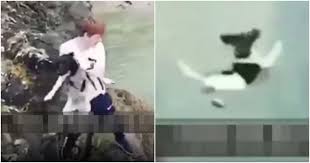 What a major asshole.

There’s not many things that I think almost everyone in the world can agree on, but I thought that one of them would be that there’s absolutely no reason why anyone would want to throw a terrified animal off a cliff and into the sea. Unfortunately though, the video below has proved me wrong.

The footage comes from Falmouth, Cornwall and shows some laughing asshole holding a dog that’s clearly shitting himself in his arms before throwing him off a cliff and into the water below. Both the guy filming and the guy doing the throwing find it absolutely hilarious which really does make me wonder about just how people like this can exist.

You can watch the video below but be warned it is kinda distressing:

Awful. Police are at least searching for the perpetrators and hopefully they will be found fairly shortly and punished accordingly. Still can’t believe that people actually think doing something like this is actually funny and that it’s a good idea to film it and share it on social media. Maybe I should be thankful for the fact that I recognise how atrocious this behaviour is?

The good news is that the dog has been looked over and that there’s no lasting physical injuries from this. No telling how messed up he’ll be psychologically though. Looks like he’ll be absolutely terrified forever to be honest which is just super sad.

Hopefully these scumbags get the book thrown at them by the police but we’ll have to wait and see. Don’t think that the punishment is gonna fit the crime though.

For more dogs, check out these dogs that have formed a death metal band. Much better.