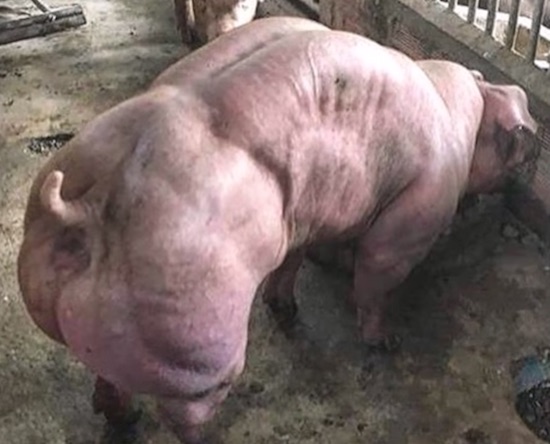 You’ll never be as jacked as these guys.

Genetically modifying food has been an ethical question for a while now, and I’m sure it’s going to become even more of an issue after the video and pictures in this article have emerged.

As you can see, Korean and Chinese scientists are using genetic editing to create ‘double muscled’ pigs that provide more meat that’s also leaner as well. The scientists are editing the pig’s genes rather than transplanting genetic information from another species, which they’re hoping is enough of a distinction that consumers and regulators will both be convinced that it’s a safe process.

I’m not so sure because I mean look at those guys – there’s no way that’s ‘normal’, right? Take a look at this report on the subject and make your mind up yourself:

Yeah it just doesn’t look right does it? And I’m pretty sure the animals themselves can’t be too happy about walking around double their natural size just waiting to be slaughtered? No way that’s a comfortable feeling. Screw it, I’m going vegan.

For more pigs, check out these guys making a daring escape from a truck heading to the slaughterhouse. Ouch.