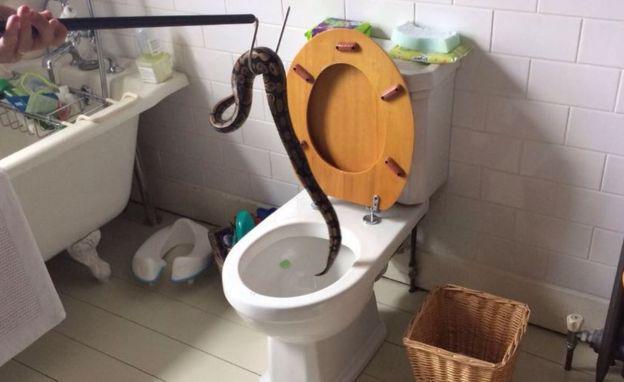 There are a lot of things that you don’t want to find when you pick up the toilet seat. Usually that someone has left a massive stinker in there and forgot to flush is my number one to avoid, but it turns out that you might have to worry about massive pythons lurking around down there too.

At least that’s what one young schoolboy from Southend, Essex had to deal with when he went into his bathroom last Wednesday. Understandably he went crazy and ran to his mother Laura Cowell, who immediately called pet shop Scales and Fangs to remove the python from their toilet.

Here’s what Ethan Pinion from the shop said about the snake:

It smelt of bleach and a bit toilety.

He most likely came up the u-bend and is expected to recover fully.

I’ve done many snake rescues in my 10 years, but I’ve never had one in a toilet before. It’s definitely a first for us.

I think the snake probably escaped and went down their toilet, and ended up in this one, as all the sewers are connected.

It probably hadn’t been there long as it is healthy and not underweight, although it is suffering from scale rot, probably from the bleach.

We’ll treat it at the store and once in perfect health he’ll be rehomed with someone reputable so he won’t end up in a toilet again. 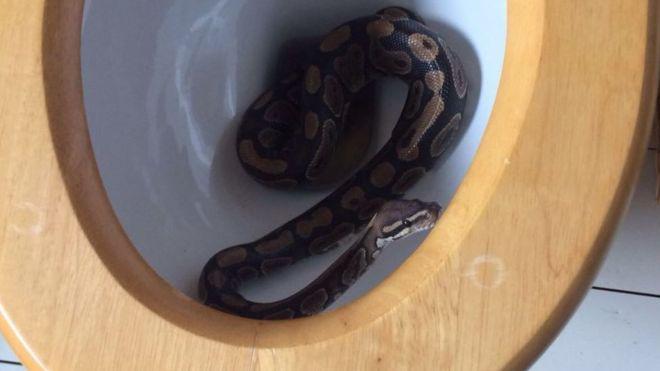 Useful analysis there Ethan. Laura Cowell on the other hand wasn’t so detached from the experience:

My son was frantic, and shaking, and I could tell something was wrong, but that was not what I expected.

I had to use a broom handle to lift the lid, then out popped its head and its tongue came out as well.

I’ve been petrified ever since and have put weights on the toilet lid to stop him from coming out again.

Well, I don’t doubt it was a scary experience but you’ve gotta get over it sooner or later and if you’re gonna use the toilet you’re gonna have to take the weights off anyway. It seems completely pointless to clamp the seat down.

Anyway, I hope Laura and her son get over it as it sounds like a pretty horrific experience. Especially now that snakes can also stand up and open doors too apparently. Yeowch.