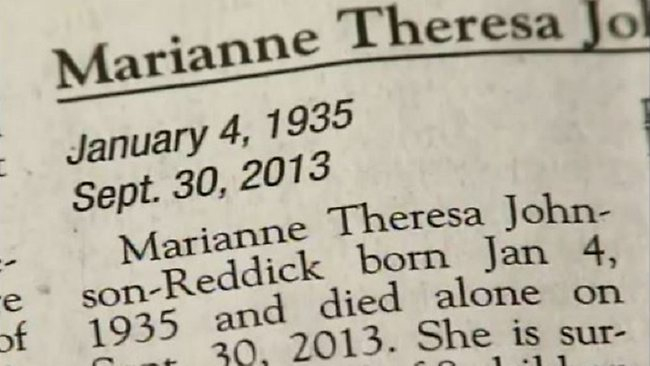 Next time you think you had a sucky childhood, ask yourself if you would ever write anything like this in your mother’s obituary.

When I finally kick the bucket, I hope that nobody is writing shit like this about me in my obituary – least of all my own children.

Marianne Theresa Johnson-Reddick passed away on August 30th of this year at the age of  78. One of her eight children took it upon themselves to write the following obituary for her which is probably one of the most awful things a child could do their parents. I guess she doesn’t know about it at least.

It was submitted to the Reno Gazette Journal and published both online and in print but has since been removed:

‘Marianne Theresa Johnson-Reddick born Jan 4, 1935 and died alone on Aug. 30, 2013. She is survived by her 6 of 8 children whom she spent her lifetime torturing in every way possible. While she neglected and abused her small children, she refused to allow anyone else to care or show compassion towards them. When they became adults she stalked and tortured anyone they dared to love. Everyone she met, adult or child was tortured by her cruelty and exposure to violence, criminal activity, vulgarity, and hatred of the gentle or kind human spirit.

On behalf of her children whom she so abrasively exposed to her evil and violent life, we celebrate her passing from this earth and hope she lives in the after-life reliving each gesture of violence, cruelty, and shame that she delivered on her children. Her surviving children will now live the rest of their lives with the peace of knowing their nightmare finally has some form of closure.

Most of us have found peace in helping those who have been exposed to child abuse and hope this message of her final passing can revive our message that abusing children is unforgiveable, shameless, and should not be tolerated in a “humane society”. Our greatest wish now, is to stimulate a national movement that mandates a purposeful and dedicated war against child abuse in the United States of America.’

Ouch. Next time you think you had a sucky childhood ask yourself if you would ever write that about your parents.

Since the story broke the two authors of the piece – Patrick and Katherine Reddick – have come forward and explained that they grew up in an orphanage with four of their other siblings after their mother regularly beat all of them – sometimes with a metal tipped belt – and they were eventually separated from here. The family were actually directly responsible for the introduction of a law in Nevada which gave equal consideration to the best interest of the child when terminating parental rights, which enabled this separation to occur. Nevada was one of the first states to pursue such a law – one that is now widespread in the States.

Katherine and Patrick explained that their decision to publish the obituary wasn’t solely to shame their mother – although this was a factor – but also to raise awareness about child abuse and how damaging it can be. It looks like they more than succeeded on both counts.