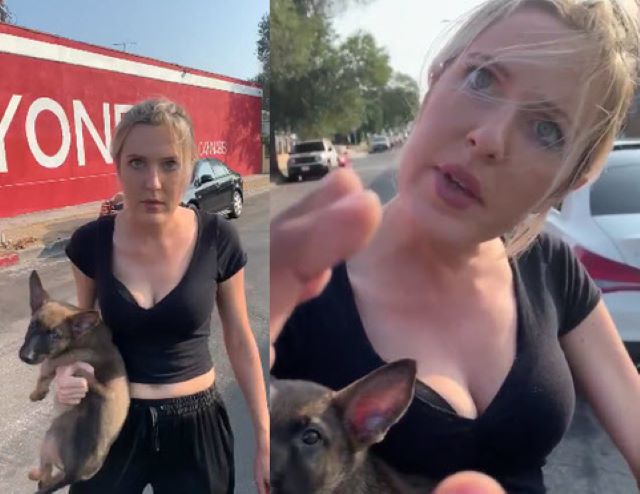 This is seriously disturbing behaviour.

A deranged (and possibly possessed) woman has been caught on film harassing a man for no apparent reason before eventually lobbing her terrified dog at him and cementing her contendership for biggest scumbag of 2020.

If you can get past how utterly terrifying this girl is, it’s still not easy watching her abuse her puppy at the end, so be warned:

What an absolute lunatic. I genuinely would like to know what drugs she is on or what spell she’s been put under because she is looking and acting straight up demonic throughout. I think she blinked like twice throughout the entire video? In fact it looks like she painted eyes on top of her eyelids and is just arguing with her eyes closed throughout the whole thing. Just terrifying stuff all round.

There’s no context around the video online but I sure hope that puppy is in safe hands because the idea of her taking it back home is just unbearable. I don’t even think it’s the first time she abused that puppy because it ran straight to the guy filming and stuck to him instead of running back to its owner like most dogs do. Let’s hope this guy got the police or RSPCA involved rather than just put the footage online to expose this psycho.

UPDATE – he ended up taking the dog with him and keeping it: