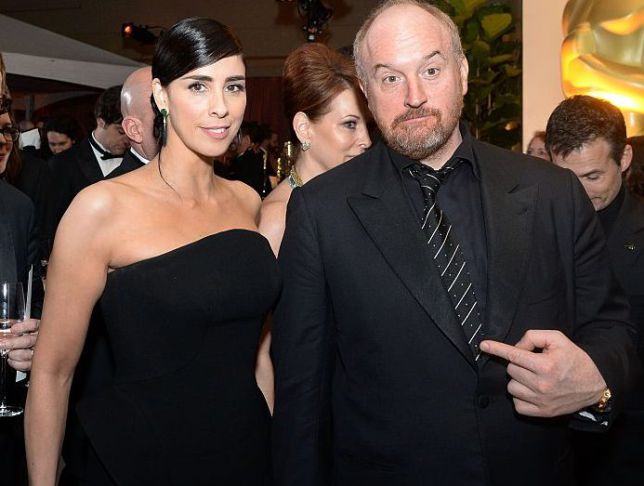 Whilst most women (and people in general) who heard about these allegations were suitably appalled, one woman has come out in his defence in the form of his old friend Sarah Silverman. Well I say in his defence but it’s not really that – she just says that he used to do that in front of her all the time when they were younger and she didn’t really mind and actually kinda enjoyed it. Not gonna lie, I do find that kinda weird.

Anyway, here’s what she had to say exactly during a recent interview with Howard Stern:

It’s not analogous to the other women that are talking about what he did to them, because he could offer me nothing. We were only just friends. So sometimes, yeah, I wanted to see it, it was amazing. Sometimes I’d be like, “Fucking, gross, no,” and we’d get pizza. So I’m not saying what he did was okay, I’m just saying at a certain point, when he became influential — not even famous — but influential in the world of comedy, it changes.

I love him. He’s my brother. I’ve known him since I was 19. It’s so hard to talk about, because, you know, it’s all very black and white until it comes to your front door and the “bad guy” is someone you love. Listen: What he did was wrong. I would not say it was analogous to the serial rapist Bill Cosby, I would not say it’s even close to Harvey Weinstein.

His pathology is permission-based — I’m not saying that’s okay because once he got famous, even just in the comedy community, that changes everything, and it makes it not okay — including, as he said even, putting these women in a predicament.

It took him a long time to realise that that was not okay. But it just seems like how people come forward and say “I did this and I have immense remorse and I want to make it right” … I’m not saying they shouldn’t be punished or whatever, but it just is… They’re dead to the world, and then these schmucks that deny deny deny, no matter how much proof there is — and I’m talking about Donald Trump, I’m talking about Kavanaugh.’

Yeah I mean that’s kinda all over the place and rambling, but it isn’t exactly standing in solidarity with Louis CK’s victims there, which is how you would normally expect a fellow woman to to act is it? These thoughts were reciprocated by Rebecca Corry, who then received some kinda half assed apology from Silverman as well:

Rebecca I’m sorry. Ugh this is why I don’t like weighing in. I can’t seem to do press 4 my show w/out being asked about it. But you’re right- you were equals and he fucked with you and it’s not ok. I’m sorry, friend. You are so talented and so kind.

Actually her apology isn’t so bad but I guess if you don’t have anything good to say then you probably shouldn’t say it all? I’m sure it wouldn’t be that hard for her to get her PR person to say something like ‘No questions on Louis CK’, but then I suppose she would lose all the publicity she got from making statements like the ones she did in the Howard Stern interview. Guess it’s a double edged sword. Or she knows exactly what she’s doing. Who knows?

For more Sarah Silverman, check her out doing a pretty funny interview with Mark Wahlberg on Graham Norton. Jokes.