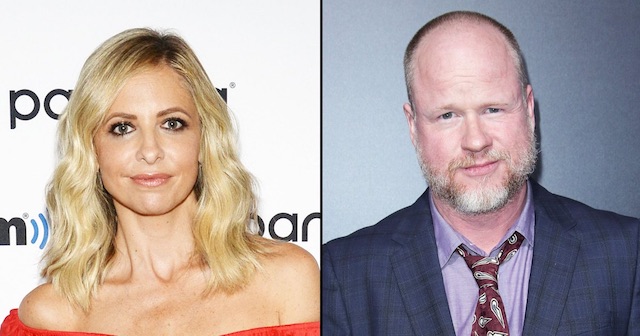 We brought you the news late last night that ‘Buffy The Vampire’ star Charisma Carpenter had accused creator Joss Whedon of toxic abuse during her time filming the show and now series star Sarah Michelle Gellar has distanced herself from Whedon as well.

Gellar posted the following short statement to her Instagram account in that weird Comic Sans style font that people seem to be using a lot these days:

Sounds like she’s sensibly trying to stay out of all it and not get into any details, but the fact that she said she no longer wants to be associated with Whedon kinda says it all really doesn’t it? I remember at the time reading an article that she was really mad at him for making her sing during the musical episode because she really wasn’t confident in her voice and didn’t want to do it, but he made her anyway – I didn’t really think it could be anything as bad as this though.

Amber Benson – who played Tara on the show – has since come out in support of Charisma Carpenter as well with the following tweet and I imagine that we’ll be hearing a whole bunch more similar statements to this in the coming days:

Buffy was a toxic environment and it starts at the top. @AllCharisma is speaking truth and I support her 100%. There was a lot of damage done during that time and many of us are still processing it twenty plus years later. #IStandWithRayFisher #IStandWithCharismaCarpenter https://t.co/WJAmDGm76C

Really sad isn’t it? Buffy was one of my favourite TV shows growing up and really pushed some boundaries and you kind of imagined that everyone involved in it was just having a great time making this sick TV show and it sorta sucks when you find out that this wasn’t the case at all. Hopefully everyone who was subject to this abuse has managed to process it and deal with it over the years, although Benson’s tweet doesn’t really have me that confident about that. Solidarity with survivors.

For more of the same, check out our ranking of the best vampire slayers in history. Any ideas who gets the number one spot?