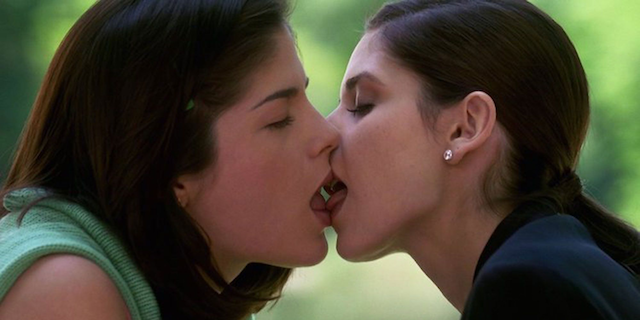 I wasn’t aware that the MTV Movie Awards was even still an event any more, but I remember back in the early 00s they were an absolutely humongous deal that everyone would tune in for to see what kind of crazy japes the celebrities du jour would be getting up to at them.

That’s probably why the powers that be decided to honour Sarah Michelle Gellar and Selma Blair with the ‘Legendary Lip Lock Award’ at this year’s event – as they were trying to get people who used to know about the awards back then involved with them again. Certainly got me interested at least, especially as the pair also attempted to recreate their legendary makeout scene from ‘Cruel Intentions’.

This being 2020 they obviously had a bit of a problem with social distancing measures getting in the way:

Yep, still awesome. Asked why she thought that the kiss had remained so iconic for so long, Selma Blair said the following:

I think the reason the kiss has resonated with people so long is not just for the initial shock value but because it was a catalyst for so many young people to help them realise certain aspects of their sexuality and help make people comfortable to be who they really are.

That’s a nice way to frame it, but I think it’s a bit optimistic. Sarah Michelle Gellar added the following analysis which is probably more on the money:

It also represented a paradigm shift to a new dynamic towards acceptance in pop culture.

Well, also it was super-hot.

Yep, definitely that last bit I feel was probably the most important factor in why pretty much everyone from that generation is still talking about it today and can probably remember where they were the first time they saw it. That’s the definition of iconic.

For more of the same, check out when the pair recreated the kiss again earlier this year. Guess they can’t get enough of it hey?