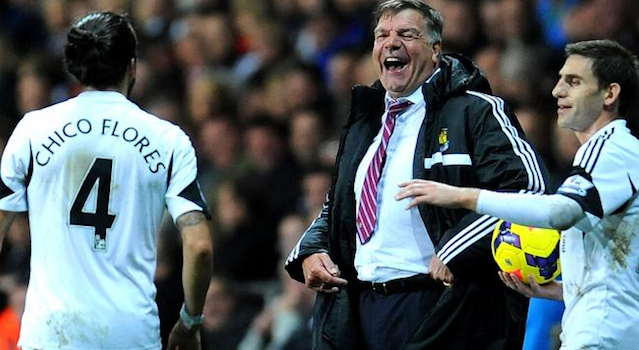 Perhaps the best way to deal with dirty divers and simulation in the modern game is to just laugh in the face of people who are faking it. Seems to have worked for Big Sam.

If you caught Match Of The Day 2 last night and watched it to the end for 2 Good 2 Bad then you will have already called this but it doesn’t make it any less funny/noteworthy, and it’s just as funny watching it again.

Everyone knows that diving is a big problem in football these days, and it seems as though not a week goes by that someone isn’t moaning about someone diving to win a penalty or the referee getting a decision wrong regarding the subject. The media and everyone you know are always coming up with ways they think they can clamp down on it and eradicate it from the sport, but Sam Allardyce came up with a great new method that nobody has though of yet yesterday.

During West Ham V Swansea yesterday, Swansea centre back Chico Flores tangled with West Ham striker Carlton Cole and was left writhing around on the floor holding his face near the touchline. Sam Allardyce didn’t believe that Flores had even been touched by Cole – at least not enough to warrant this reaction – and so proceeded to laugh in Flores’ face repeatedly when he finally made it to his feet. The laugh was so exaggerated though and no way a real laugh, which is definitely the best part.

This got Flores so incensed that he confronted Big Sam and eventually had to be restrained by his teammate Angel Rangel from going overboard at the West Ham manager. It looks like Allardyce got what he wanted though, as clearly Flores wasn’t as injured as he was making out if he could quickly get to his feet and confront the manager. Hopefully more managers will employ this tactic in the future and we can see a lot more dumb videos of managers laughing in the faces of players.