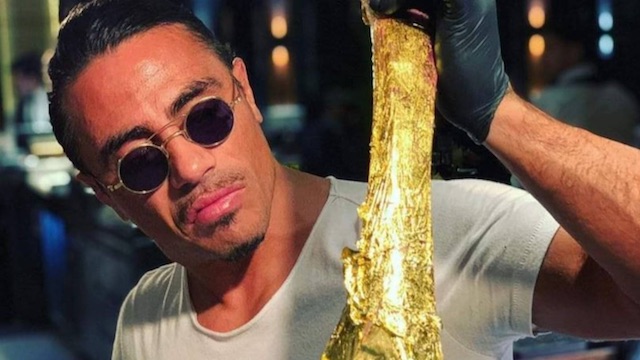 Salt Bae is probably the most annoying celebrity chef out there because he only got famous off some stupid meme of him sprinkling salt over a steak in a really sexy way, but I suppose you have to give the guy his due for truly embracing his newfound fame and going absolutely crazy with it.

The latest of his ventures is a new steak restaurant in London called Nusr-Et at the The Park Tower Knightsbirdge Hotel that is set to finally open its doors on May 17th after being delayed for several months due to the global pandemic. Easily the biggest attraction on the menu is the 24 carat golden tomahawk steak that could set you back £700.

Take a look at this badboy:

That’s really stupid isn’t it? And if you’re even considering spending £700 on a steak then you’re already living on another planet really aren’t you?

If you’re sitting on the fence – and surely if you could afford this then you’re probably not going to be in two minds about it because you probably already spend your money on dumb shit like this – then maybe the opinion of private chef and food blogger Vanessa Cole from her visit to his Dubai restaurant might twist your arm:

Salt Bae’s steaks are tender and melt like butter in your mouth and are certainly worth the money.

I told the waiter that we had come specifically for Salt Bae to cut our steak, so they brought me a menu that included only the premium or gold-wrapped steaks.

I figured Salt Bae only comes out for the most premium dishes.

OK I’m in. I had probably better book a table for opening weekend though because he’s probably not going to be hanging out there every single weekend is he? Gonna need to get the full experience for that money as I’m 100% gonna need to be putting it on the gram. See you there.

For more of the same, check out when this guy lost the plot after he saw his girlfriend twerking for Salt Bae. Can’t really blame him can you?