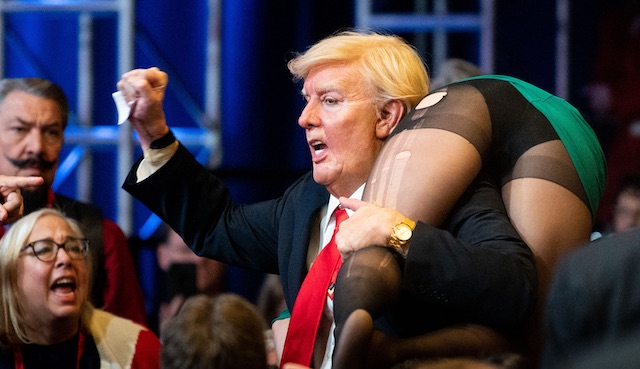 It’s only a few days before the eagerly awaited second Borat movie makes its debut on Amazon Prime, so obviously Sacha Baron Cohen is revealing some of the stunts that took place in it and the latest of these sees him gatecrashing a Mike Pence rally dressed in a humongous Donald Trump fat suit.

The scene comes from the Conservative Political Action Conference earlier this year, where at the time it was announced that a Trump impersonator arrived on stage carrying a woman over his shoulder during Vice President Pence’s speech. Turns out that that imprersonator was actually Sacha Baron Chone dressed up as Borat dressed up as Trump. Very clever.

You can see a clip of what went down in the trailer to the movie below, but Cohen also explained to The New York Times how he managed to sneak into the rally:

Bear in mind, I spent five hours in makeup that morning with the prosthetic team changing my face into Trump’s face and this fat suit is huge.

It’s a 56-inch fat suit to turn my waist into Trump’s because we had estimated that was the most realistic.

A security guard’s wand was set off and I had to say I had a defibrillator.

Then I ended up hiding in the bathroom, listening to conservative men go to the toilet for five hours until I broke into the room.

We were surrounded by Secret Service and police and internal security.

OK, so I guess he’s not exactly telling us everything about what happened when he broke into the rally because he wants us to watch the movie, but giving us that little bit of the story is definitely whetting our appetite for seeing what actually did end up happening. Only a few more days to wait.

For more of the same, check out when Cohen got busted filming in his Borat costume earlier this year. Pretty funny scenes.