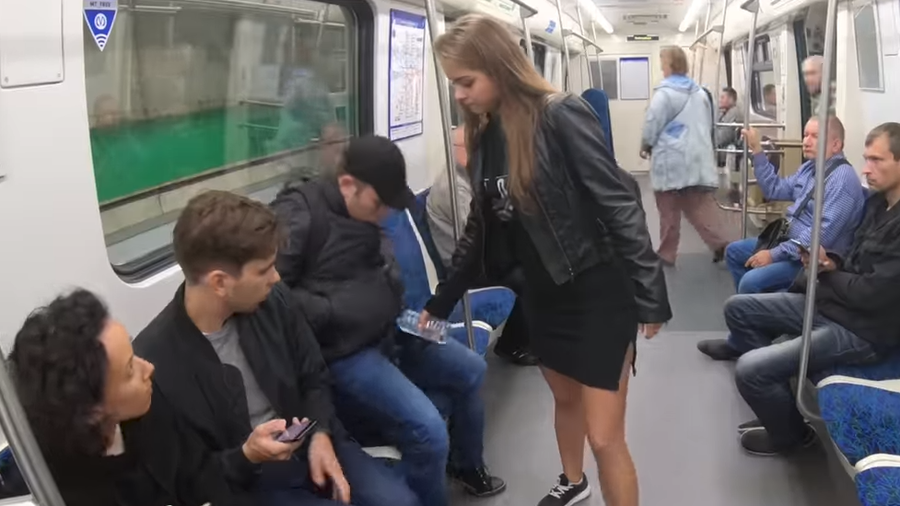 Whilst I’m not going to argue that guys spreading their legs on the tube/train etc really wide so that people can’t sit down and make people feel uncomfortable by squashing them is a 100% dick move, I’m not sure if the way to deal with it is to pour bleach all over their crotches.

Nevertheless, this is how 20 year old Russian feminist activist Anna Dovgalyuk has chosen to raise awareness of the problem, by going around the St Petersburg tube system and pouring it all over the crotches of men that she’s judged as manspreading. The bleach that she used is apparently 30 times stronger than the regular household stuff so it was almost certainly going to eat into the fabric of their clothes and leave indelible stains and maybe even screw up their dick and testicles too, not sure. What is for sure though is that Anna wanted these marks to serve as identifying marks for all those caught manspreading, although this is only going to last until they change their trousers, so not sure how useful that is, but I like the idea at least.

Here’s the video with her full manifesto as well:

This is my new video manifesto, dedicated to the problem of manspreading.

The disgusting act that is being fought with around the world and it is hushed up in us. Men demonstrating their alpha-manhood in the subway with women and children around, deserve contempt.

If you publicly show what kind of macho you are, we will publicly cool you off! This video manifesto was created in assistance with friends who share my position.

I mean yeah, again I have to come back to my original point that maybe pouring bleach on someone’s crotch isn’t the best way to protest this due to how dangerous and disrespectful it is? I felt like some of the guys in the video were a bit unlucky too, like the guy who was asleep and guys who didn’t have their legs that wide open? But a lot of them were definitely doing it that’s for sure, although I dunno if they deserved to have bleach poured over their crotches.

However having said this I wasn’t even really aware how much of a problem this was and the video has had over a million views in about a day, so it’s definitely helped in raising awareness of it and will hopefully lead to at least some people doing something about it. On the other hand it’s probably just going to make people who hate feminism and feminists hate them even more and do it even more. I think it might do more harm than good though. Maybe. Doing a good job of sitting on the fence here.

For more of the same, check out this feminist throwing a bottle of piss over a reporter’s head. Again, maybe not the best tactic.